One boy's induction into horror

1976 was a downright horrific year, if you were me. My parents, already well aware of my budding interest in all things cinematically macabre, shepherded me to the local Loew's in our tiny village of Pittsford, N.Y., to see my first Alfred Hitchcock film – Family Plot – which, as it turned out, also happened to be the director's underrated swan song.

But entry-level Hitch was just the droll, Bruce Dern beginning of my own personal red (for the blood), white (for the pallor), and blue (hello, cyanosis!) Bicentennial annum. There were return trips to the Loew's – syrup-sticky, crushed-popcorn-flecked, lousy-line-of-sight seating and all – for Carrie, The Omen, Dino de Laurentiis' remake of King Kong (predictably, Rick Baker's nifty gorilla suit impressed me way more than Jessica Lange's feature debut), and Burnt Offerings, the only one of the flickering, 24-frames-per-second bunch to give me honest-to-goodness night terrors. (I dare you to watch it by yourself, alone, in the dark, and then tell me Oliver Reed's final moments don't freak you the hell out.)

And then, on Halloween weekend, my monster-mad, Froot Loops-fueled, preteen self stumbled across a staticky cathode-ray transmission seemingly beamed from some previously forbidden planet directly to my parent's Zenith Solid-State ChromaColor II TV, and from there into my gob-smacked li'l towhead. Fiddling with the rabbit ears, blissfully unaware of the electron gun firing through the phosphor-coated screen less than 24 inches from my face, I beat the ionosphere, sunspots, and whatever other outta-sight interference there was and pulled in a whole new way to spend Saturday afternoons.

Through sheer blind luck and the stubborn perseverance of the very young, what I had chanced across was the now legendary Monster Movie Matinee on Syracuse, N.Y.'s WSYR Channel 3, hosted by the always unseen Dr. E. Nick Witty (Get it?! I didn't.) and his lab-coat-clad, hunchbacked assistant Epal. From that point on and for every single Saturday until my family lit out for Texas in 1980, I knew there was nothing wrong with my television set, and I made no attempt to adjust the picture. They were controlling it, not from the outer limits but from Syracuse, of all places.

That first matinee, in October '76, I sat enthralled and watched Vincent Price in 1959's House on Haunted Hill. It's a classic now, sure, but at the time it was a black-and-white revelation that instantly added another name to my rapidly growing list of really neat filmmakers: William Castle.

Over the next several years, other Castle flicks – 13 Ghosts, Mr. Sardonicus – would crop up on WSYR's afternoon horror buffet, and, unsurprisingly, I devoured them whole. But my favorite William Castle film was always (and still is) 1964's rarely seen The Night Walker. It's a surreal bad dream of a film, clearly shot on a meagre budget but phantasmagoric nevertheless, scripted by Psycho author and occasional Castle collaborator Robert Bloch and featuring a mesmerizing turn from no less than Barbara Stanwyck. It's probably Castle's most atmospheric and original film, which may be why it never had any of the master showman's gimmickry attached to it, and also why it seems to have virtually vanished – like a dark dream-walk over rotten floorboards – into the "Not Yet Available on DVD" zone.

Which is a bum break for Castle fans, because with the release this month of the 5-disc, eight-film (and one helluva documentary) The William Castle Film Collection (Sony/Columbia, $80.95), Castlemania is back in form and looking as crisp, clean, and genially spooky as never before.

Fans of the director – John Waters chief among them – have long enthused over Castle's ingenuity both behind the lens and, more famously, in his roadshow ballyhoo releasing gimmicks: techniques later tweaked and adopted by everyone from The Blair Witch Project to the Alamo Drafthouse. The certifiably cool news with The William Castle Film Collection is that, amidst a veritable coffinload of featurettes and supplementary materials, the set offers a chance to actually see those same glorious marketing strategies in action, as they happened, thanks not to the magic of "Illusion-O" or "Percept-O" but via actual footage collected/orchestrated at various Castle films as they opened across the country, often by Castle himself.

So not only do we get to see the mad, bad, dangerous-to-know Jean Arless wielding a "surgical knife" with all the feral glee of Sarah Palin gutting a deer in the 1961 Psycho-homage Homicidal, but we also get Castle's own self-reflexive newsreel footage of the film's standing-room-only opening night in – where else? – Youngstown, Ohio.

Also of note to monster kids who grew up glued to their own Friday evening/Saturday afternoon monster shows is the inclusion of a trio of Castle films never before released on DVD: 13 Frightened Girls!, Zotz!, and The Old Dark House. The latter two are, well, wacky in an almost Disney-esque, Son of Flubber meets American International Pictures' "beach party" series style and, while fun to watch as a footnote to Castle's horror output, are strictly for Castle completists. (Both star future Newhart regular Tom Poston, which is weird enough when you think about it.)

I'm still waiting for a proper release of The Night Walker – with a score by The Addams Family themester Vic Mizzy, how could I not? – but Sony's done more than even this creepy-crawly kid could have hoped for with The William Castle Film Collection. I mean, c'mon, how often do you get to see Joan Crawford practice chopping a dummy's head off with an axe three times in a row? Not often enough, to be sure. 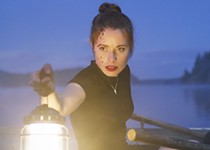 SXSW Survival Thriller Asks What Keeps You Alive?
Not just another Cabin in the Woods