I Can Watch What Where?

Finding films for cheap on the Internet

Tweet
print
write a letter
Everybody knows traditional distribution models have gone haywire in the Digital Age. Festival films such as Mary and Max are skipping the typical next step, a theatrical run, to debut instead on premiere cable outlets such as HBO or, more recently, video-on-demand services from the likes of IFC, the Sundance Channel, and Cinetic Rights Management's FilmBuff, the new VOD outlet programmed by former South by Southwest producer Matt Dentler. And there you have it: first-run arthouse cinema, available to the masses, to be viewed either on TV or downloaded to a computer. Just like that.

Well, the masses in possession of a pricey cable subscription. Enter the Internet, where for the low price (okay, no price) of riding the coattails of your next-door neighbor's wireless connection you can find a treasure trove of film available for free or negligible cost, from underseen festival darlings to the classics of world cinema. Hulu, most popular as an alternative to DVR'ing your favorite TV show, has a limited (and zanily scattershot) feature film catalog, which is supported by commercials. Other free digital content providers include Crackle (owned by Sony Pictures) and Sling. Netflix began streaming last year a huge chunk of its library to subscribers; the cheapest unlimited plan runs $8.99 a month, but when you consider that almost any video store you walk into today will have had its VHS copy of Trust jacked years ago, nine bucks doesn't sound too expensive to instantly stream Hal Hartley's love-and-an-unpinned-grenade charmer. And serious film buffs will want to proceed directly to the Auteurs (www.theauteurs.com), which boasts the Criterion Collection as a partner; with the click of a couple of buttons, you can curl up to Wong Kar Wai's back catalog for $5 a pop or revisit Polanski's Knife in the Water for absolutely free.

But the Internet has gotten us all pretty lazy, right? And scouring the Web for that one film you're looking for can be awfully exhausting. Hence the rise of search engines devoted to streaming content, like SpeedCine's just-the-facts site, which indexes more than 16,000 films and lets you know if a film is available online for free, for rental, for purchase, or through a subscription service. There's also the brand-new Jinni, which calls itself a "taste engine." Jinni includes TV shows in its search engine, as well as an ingenious (if still a little hinky) search option for "mood," in which you can narrow your options to, say, "gloomy" movies. Further refine the search to free content only, and you've gone from more than 1,500 films to 35, including a 1948 adaptation of Anna Karenina starring Vivien Leigh. A black-and-white postcard from the Russian class wars with a detour into adulterous love derailed? I'd say they hit the nail right on its Gloomy Gus head. 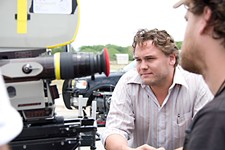 Breaking out of the Film Fest Box
After a festival run, indie movies used to die on the vine. Video-on-demand is changing that.