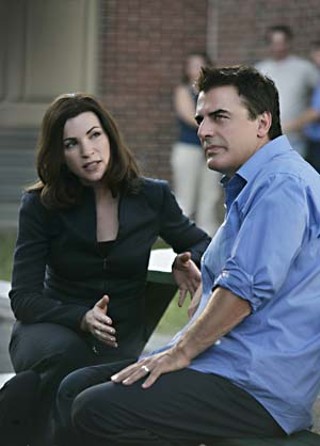 The bulk of the fall TV season has launched, and I've been wrestling with the best way to talk about it. I could go old-school and talk about the new shows night by night, but this year, I think I'm more inclined to discuss what has caught and held my attention.

The best of the new procedurals: NCIS: Los Angeles (Tuesdays at 8pm on CBS). I hate procedurals, but something about this series can't help but be cool. I think it has to do with the chemistry between stars LL Cool J and Chris O'Donnell, who play Navy operatives who track and capture the bad guys out to do us harm. With a strong introduction of the characters first on the flagship NCIS, along with said chemistry between its leads, I think NCIS: Los Angeles will be a hit.

The best of the new nurse-centric series: Mercy (Wednesdays at 7pm on NBC). Newcomer Taylor Schilling stars as the alpha nurse Veronica Flanagan Callahan, a veteran of the war in Iraq who is having trouble adjusting to life stateside. She's married to a good but dull man, her family is loving but a little too fond of partying, and the doctors she's supposed to be subordinate to are idiots. Like Showtime's Nurse Jackie, Callahan is a lot more than a hand-patting nurse. She saves lives, and because of her war experience, she thinks fast under pressure. While comparisons to Grey's Anatomy prevail, what makes Mercy more compelling is that it treats the personal dramas of its characters and the work they do with equal seriousness and a lot less collateral silliness. No brain-tumor-induced ghosts in this hospital drama.

Runner-up: Trauma (Mondays at 8pm on NBC). This series follows a team of paramedics as they rescue and save lives out in the field. What makes this one particularly interesting is that the titular trauma is not only about their work but the fact that the core group of paramedics survived their own trauma – a helicopter crash in the middle of a rescue that left most of their crew dead. How they cope with their collective survivor's guilt informs their behavior. The strong cast, led by Derek Luke (Antwone Fisher) is strong enough not to let it lapse into bellybutton gazing.

The best of the I Am Woman series: The Good Wife (Tuesdays at 9pm on CBS). Okay, the premise – which asks what becomes of the wife behind the disgraced politician – obscures what this series really is: another courtroom drama. What makes this stand above the others, as well as above the slew of new series about women coming into their own (Eastwick, Accidentally on Purpose, Cougar Town) is the luminous Julianna Margulies. As Alicia Florrick, Margulies is brave, vulnerable, and gutsy in a world that seems stacked against her. When she's not pitied or taken less than seriously, she is thrust into impossible situations and forced to sink or swim. What the series shows astonishingly well is the double standard not only between the sexes but also between women. Christine Baranski co-stars as a senior member of the law firm Florrick joins, offering to mentor her but in reality only using Florrick as the dumping ground for her most bothersome cases. Unlike Courteney Cox over on Cougar Town, whose biggest annoyance seems to be that her near-perfect figure is now 40 years old, Margulies' Florrick has real problems to deal with – an imprisoned husband (played by Chris Noth) whose bad deeds continue to surface on the nightly news, children she wants to protect, a well-meaning but overbearing mother-in-law, a fellow lawyer bent on sending her back to the suburbs, and most importantly, the preservation of her dignity. Margulies makes Florrick not only heartbreakingly human but also well worth rooting for.

Austin's only public access center, known as ChannelAustin, is set to unveil its $1 million overhaul, and it's having a big, old-fashioned open house to celebrate Oct. 10 at ChannelAustin, 1143 Northwestern Ave., from 2pm to 5:30pm. Food, fun, tours, and music are in store. Find out why this is big news for Austin media-makers in next week's "TV Eye."

TV Eye
Cleaning Out the Inbox