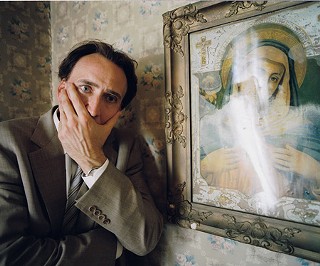 Auteur-weary? Not when Werner Herzog is at the helm; he brought two films to Toronto, including Bad Lieutenant: Port of Call New Orleans.

The festival always begins for me as I pack and deal with digging out some long pants. Especially after the beastly summer we've just experienced in Austin, it's been months since I've had to think about clothing suitable for temperatures below 100 degrees. Not that it was anything but balmy during the week I spent in Toronto; in fact, the weather could not have been more lovely. But my unpreparedness for the cool struck me as soon as I unpacked my carry-on bag upon arrival: I had left my sweater behind at the security checkpoint at the Austin airport.

After that, I remained a bit addled for the rest of the festival. Pleasantly so, I'll admit, but it can be hard to plan a schedule and make selections among the festival's more than 200 films when you have no overriding agenda. There were a few films I had to see in order to file reviews for the Chronicle (things like Jennifer's Body, which was not screened in Austin before it opened last Friday), but apart from those "must-sees," my schedule was wide open. Without prior study, however, how is one to differentiate between such titles as Solitary Man, A Serious Man, and A Single Man? Hint: Solitary Man stars Michael Douglas as a man the program book describes as "an alpha male led astray by his greed and his zipper"; A Serious Man is the new Coen brothers film that received widespread acclaim in Toronto and opens in October across the country; and A Single Man is the directing debut of fashion designer (and Austin-born) Tom Ford, who co-scripted the film from a Christopher Isherwood novel. Of the three, I only saw the lovely and touching Ford film, which stars Colin Firth and Julianne Moore in a story about a day in the life of a grieving gay English professor in 1962. A Single Man was the first announced (and what appears to be the most lucrative) sale of the festival, a smart move on the reinvigorated Weinstein Company's part.

With not one but two movies playing in the festival, the filmmaker Werner Herzog definitely caught my eye. All due respect to Abel Ferrara's 1992 masterpiece Bad Lieutenant aside, it's hard to resist the siren call of Herzog's Bad Lieutenant: Port of Call New Orleans, starring Nicolas Cage. Herzog's film is not a remake, sequel, or reimagining; Herzog says he's never seen Ferrara's visceral film about sin and redemption, and after seeing Herzog's movie, his claim seems quite believable. Much of the film's crazy power is due to the unfurled Cage at its center; we haven't seen the actor this measuredly unhinged in a long time, and it bodes well for the producers' hope of creating a franchise for the character. Herzog demonstrates his abilities as a genre director with this and his other fest title, My Son, My Son, What Have Ye Done, a police and hostage drama that is fairly routine except for some quirky touches (as befits a film produced by David Lynch). Revolutionary Road's Michael Shannon plays the film's nutty mother-killer and hostage-taker (he's also in Bad Lieutenant: Port of Call New Orleans), while Willem Dafoe is the detective, Chloë Sevigny the girlfriend, Udo Kier the best friend, and Lynch regular Grace Zabriskie the mother. If he wanted, it seems possible that Herzog could carve out a career something like Steven Soderbergh's, in which he could support his more personal films with occasional work for hire.

There were other auteurs at the festival, most of whom didn't disappoint. Todd Solondz picks up where 1998's Happiness left off with his new Life During Wartime. The focus is on the same family, though he casts new actors to play the roles. With Allison Janney at the story's center, Solondz seems more generously inclined toward humanity and allows for the possibility of forgiveness and hope. Neil Jordan delivers a modern fairy tale with Ondine, starring Colin Farrell at his most soulful. Award-winning German filmmaker Fatih Akin (Head-On) continues his ongoing focus on outsiders but switches to the key of comedy with Soul Kitchen. The storyline is fluid and funny, and the movie charmingly performed; it makes us wonder what other unplayed cards the filmmaker still has in his powerful deck. But Japanese master Kore-eda Hirokazu (After Life) loses his way with Air Doll, a story about a blow-up sex doll that comes to life. The film is buoyed by a delightful performance by Du-na Bae. Terry Gilliam yanks a modicum of success from the jaws of disaster in The Imaginarium of Doctor Parnassus, the film Heath Ledger was shooting at the time of his death. Fortunately, it's the kind of magical story that doesn't suffer from three additional actors (Colin Farrell, Jude Law, and Johnny Depp) stepping in to finish Ledger's part. The movie is a magnificent visual spectacle; however, the story sustains little dramatic interest.

Mention should be made also of a documentary, The Sunshine Boy, made by Iceland's Fridrik Thor Fridriksson. It chronicles an Icelandic family's quest to find effective treatment for their son with autism, a quest that led them to Austin's HALO (Helping Autism Through Learning and Outreach) school and its Rapid Prompting Method developed by Soma Mukhopadhyay. The therapy appears to offer some very promising results and is a local program about which I was unaware. Also of local interest is Drew Barrymore's terrific directing debut Whip It, based on former Austin writer Shauna Cross' book about the Roller Derby revival, Derby Girl. Though it was filmed in the extremely incentive-friendly state of Michigan, the story is set in Austin. You'll be able to read more about it here when Whip It opens on Oct. 2.