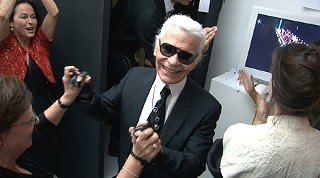 Glove Love: The Day Before: Fendi by Karl Lagerfeld

The legendary event known as New York Fashion Week begins Sept. 10. While the weeklong event is out of bounds to most of us, the small screen offers several opportunities to experience the world of high fashion vicariously. The most direct experience comes with the newly launched Full Frontal Fashion website on the Sundance Channel website (www.sundancechannel.com/
fullfrontalfashion), which offers an in-depth look via text and video at all things fashion – or just fashiony, like superexclusive parties.

The Full Frontal Fashion website provides a nice lead-in to the premiere of the cable network's newest special, The Day Before, a four-part series that looks at the 36 hours leading up to the launch of a fashion legend's runway show, capturing the excitement and, yes, panic that ensues before each event. The installments and their featured fashion icons include:

The Day Before: Sonia Rykiel: Preparations for a show celebrating the 40th anniversary of Rykiel house is complicated by efforts to present her with a special surprise (premiered Sept. 9; check listings for rebroadcast dates).

The Day Before: Proenza Schouler: The fashion world darlings otherwise known as Jack McCollough and Lazaro Hernandez nervously present their fall 2009 collection to critics and – more importantly – their financial backers for approval (airs Sept. 10 at 9pm).

The Day Before: Fendi by Karl Lagerfeld: The ever-cool Lagerfeld presents his Fendi fall 2009 collection in Milan in March (airs Sept. 11 at 9pm).

The Day Before: Jean Paul Gaultier: The final episode of the series goes behind the scenes at Gaultier's July haute couture show in Paris (airs Sept. 12 at 9pm).

The popular reality series America's Next Top Model began its 13th season when it premiered this week on the CW. In addition to the catfights, the frayed nerves, and the tested wills, this year's season features model wannabes who are shorter than 5 feet 7 inches – unheard of in the high-fashion world. But if Wednesday's two-hour series premiere was any indication, egos are just as large among petite women as they are among the glamazons.

Starting next week, ANTM will be paired with another fashion-centric show, The Beautiful Life. The new hourlong drama offers a behind-the-scenes look at the fashion world, starring a slew of beautiful performers led by Mischa Barton (The OC), who looks like the sage among this cast of youngsters. Real-life model Elle Macpherson also stars as the owner of a high-powered New York modeling agency, and Ben Hollingsworth (Degrassi: The Next Generation) is particularly appealing as Chris Andrews, a wide-eyed Iowa boy new to the fashion world. The Beautiful Life premieres Sept. 16 at 8pm.

The fall TV season is just now gearing up. Watch this space for more news and notes about series and season premieres.

Not to Be Missed

I'm a sucker for animals-as-saviors films. I remember having my heart completely captured by the 1969 TV movie J.T., which starred Kevin Hooks and a one-eyed stray cat. (I would love to get my hands on a copy.) In the new HBO film A Dog Year, the "animal-savior" is an out-of-control border collie that upends the life of a writer who is having a midlife crisis and a serious case of writer's block. Based on the 2003 book by Jon Katz, A Dog Year: Twelve Months, Four Dogs, and Me, the film stars Jeff Bridges as the mildly dyspeptic Katz, who takes in an abandoned dog at the behest of a reader. It's an odd move, given that all his other relationships are estranged, but the bond he forms with the border collie, named Devon, proves to be the most challenging and life-altering one of Katz's life. Yes, enjoyment of this film is probably helped by being a dog person, but even this pet-free person found a lot of charm in this small but lovely film by George LaVoo (Real Women Have Curves). Lauren Ambrose and Lois Smith also star.

A Dog Year airs Sept. 9 and 28 on HBO2. Check local listings for airtimes. 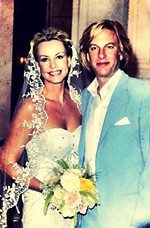