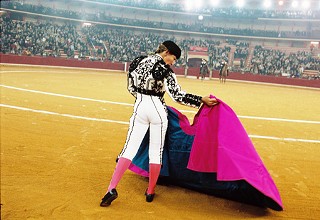 Bullfighting is one of those events many of us in this part of the world simply don't understand. Ella Es el Matador, the next film in the POV fall slate, does not clear up the confusion, but it does go a long way in showing that there is no definitive answer, which may be enough. It also does much to illuminate the history of Spanish bullfighting and the role of women in what has traditionally been a male-dominated sport.

We meet two female bullfighters in Ella Es el Matador (which was co-directed by Gemma Cubero and Celeste Carrasco). Eva Florencia is a young Italian who fell in love with bullfighting when she was just a girl. When she ran away from home at 16 to become a bullfighter, her family despaired but ultimately came to support her. Florencia's dream is to work her way up the ranks to transform herself from a journeyman bullfighter into a respected matador.

Fortunately, Florencia has a mentor in Maripaz Vega, Spain's only professional female bullfighter. The daughter of a once aspiring bullfighter and sister to five brothers who also trained to become matadors, Vega is the only one in her family who is poised to join the top echelons of matador culture. It's not fear or the threat of physical injury or worse that stands in her way, but the prevailing idea that women do not belong in the bullring.

In order to make their way to the top, bullfighters must get booked into top-level arenas. For Florencia, this means completing 25 sanctioned matches to become a matador – a difficult task, since many promoters are reluctant to book her. Although Vega has performed throughout Spain and other parts of Latin America (where female matadors are accepted), she continually has to prove herself to her male counterparts. For Florencia and Vega alike, the road to acceptance is steep and uphill all the way.

Ella Es el Matador captures Vega in some stunning moments that are both poetic and frightening. You may not become a fan of bullfighting, but after viewing Cubero and Carrasco's fine film, you will not be able to ignore its noble, if troubling, beauty.

Is "Savage Love" coming to TV? Dan Savage, a frequent guest on HBO's Real Time With Bill Maher and the writer behind a popular syndicated sex column for Seattle-based alt-weekly The Stranger, is shooting a "presentation pilot" for HBO, according to an Aug. 20 post on Savage's blog. The presentation pilot, an in-house job for the network, will help HBO execs determine if Savage and/or the theme of his column (sex, love, relationships) is viable fodder for an HBO series. Savage writes that his potential series "will focus on current events and cultural trends with sex as the filter" and that he's "hoping to bring a new kind of conversation to TV about sex – an honest conversation, one that's informed without being (too) wonky, funny without being (too) cruel, sexy without being (too) cheesy. Basically, my sex-advice column – but on the teevee!" Sounds like Savage Love would be a talk show rather than a drama or comedy series, but at this stage it's way too early to tell what may finally end up on the air.

Skins in red, white, and blue: The critically acclaimed UK teen drama Skins (see "TV Eye," Aug. 22, 2008) is getting a makeover thanks to MTV. The cable network won rights to develop a U.S. version of the series after an "intense competition," according to MTV press materials. Created by Bryan Elsley and his son Jamie Brittain, the series offers candid – and what most parents might find disturbing – insight into the lives of teenagers. "In an effort to maintain the original production's successful model wherein all the stories were written by a group of British teenagers, MTV will similarly join together unknown teenagers to write and star in the series," according to the network. The U.S. version of Skins will be set in Baltimore, Md. Production calendar is yet to be announced.