As I walk into Cliff Wildman's house in Southwest Austin, a princely pit bull trots out, having just wrapped his work on a morning shoot for the locally produced Web series Project: Rant. The show takes privately penned notes of frustration – with roommates, commuters, the world at large – and transforms them into a very public shaking of a fist; it's a sort of spiritual companion to popular venting sites like PassiveAggressiveNotes.com. The pit bull, by the way, plays a supporting role in a rant about a jerky neighbor who won't pick up after his pooch – and "rant" is the operative word here at Project: Rant HQ, where Wildman and his longtime filmmaking partner Luis Esteban Caffesse make professionally acted and produced, minutes-long cris de coeur, mining wildly funny stuff from them in the process.

Many of the rants are plucked from online submissions to the site, www.projectrant.com, which went live in March. (There are currently 36 episodes available online.) Other rants the pair find floating in the Internet ether, a reliable source of vitriol. The Web is where they found the script for the afternoon shoot, a hilarious and profane rant about a condiment-thieving roommate called "Ketchup Thief." This one's a favorite; Caffesse says they've been holding on to it for "someone we thought would really embrace it" – which turns out to be local actress Hilah Johnson, who hooked up with the filmmakers through friends of friends.

The mood of the shoot is relaxed and congenial. There's a Post-it note on the inside of the front door that reads "Fridge On?" – a reminder to turn it off for the kitchen shoot (its mechanical whir would be picked up by their super-sensitive Panasonic HPX-170) and to turn it back on when they've wrapped (something the pair has forgotten to do in the past, to obvious disastrous effect). Johnson paws through a shopping bag of clothes she brought along for the shoot, holding up a pair of pajama pants as Wildman and Caffesse set up equipment. Wildman stops, ponders. "I love pajama pants. They make everything funny." Johnson wonders if she should pair the pajama pants with a pink or purple tank. Caffesse weighs in: "I think pink is funnier."

Wildman and Caffesse – who have known each other since 1994, when they were freshmen at the University of Texas – together run Pitch Productions, a "full-service media content company." Over the years, they've shot shows for ON Networks, local commercials, and instructional videos. Project: Rant isn't a full-time job, not yet, but it's no losing enterprise, either: Wildman estimates that "not counting total tangential costs – like me going to an actor's play after working with him – we've spent about 250 bucks on the show." The plan – for now, at least – is to let the show speak for itself. And it's working: There's been some left-coast interest in the show, although Wildman and Caffesse want to keep mum on the specifics for now.

They move into the kitchen, where Caffesse mans the camera and Wildman crouches on the tile floor, script in hand. (I'm huddled in the kitchen, too, trying my best not to block the natural light.) Johnson stands at the refrigerator in her pajamas (they are awfully funny) and runs though the lines once. We dissolve into giggles almost before she has done. There's a brief powwow over how best to deliver the line, "you sketchy bitch" – I'd wager any one of Johnson's four or five readings is comedy gold – and the three breeze through several more takes of "Ketchup Thief," the sentimental favorite they've been itching to shoot. Johnson does another take – nailing "sketchy bitch" to the wall – and the room breaks out again into laughter.

Caffesse smiles. "We have dreamed of this day." 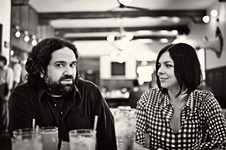