After Life and Liberty 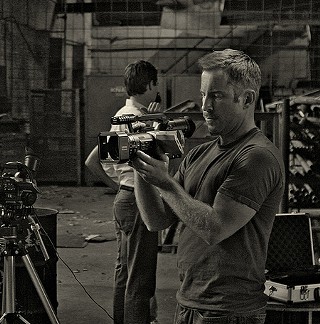 Everybody has a different idea of what happiness is, previous theories having run the gamut from an inalienable right to a warm gun. But after watching Andrew Shapter's documentary, Happiness Is, I'd venture another guess: Happiness is watching Pinetop Perkins play piano. The venerable bluesman appears in Shapter's follow-up to his 2006 rock industry summit Before the Music Dies alongside the likes of John Mellencamp, local historian H.W. Brands, and Mobile Loaves & Fishes founder Alan Graham. They all sound off on the definition of happiness, an almost comical enterprise considering how amorphous and idiosyncratic a concept it is. But what most everybody seems to agree on in this often freewheeling and inspirational doc: Treat others with kindness, and the happiness will follow.

The Chronicle spoke briefly with Shapter in advance of the July 30 premiere screening and DVD release of Happiness Is, which will serve as the kickoff for a national tour of the film.

Austin Chronicle: You spent two years traveling America and interviewing people about happiness. In your opinion, what's the happiest town in America?

Andrew Shapter: I was surprised that some of the poorest areas in the U.S. were friendlier than other areas. Go figure. Folks in New Orleans were very glad to see us filming there, and they were nice as can be. However, I have to give special props to the farming community of Yakima, Washington. We witnessed family ties there that were amazing. One grandma was celebrating her 72nd birthday, and because so many people planned to attend, her family had to rent the local high school gym to hold everyone. We showed up and saw over 200 people for one woman's birthday party. That was by far the happiest place as I can remember. That day had a big impact on the rest of the film.

AC: Happiness Is emphasizes how material wealth and possessions don't really make anybody happier – and in many cases cause the exact opposite effect. In the spirit of contrariness: What are the five material objects you can't live without?

AS: That age-old notion of "money can't buy happiness" is true, but only to an extent. If you don't have shelter or enough food, acquiring those things will definitely make you happier. So I would say the basics such as shelter, water, food, electricity, and decent transportation are a must. Those are the five things I couldn't live without. So, now that I've acquired those basic needs, no new purchase can actually help me sustain more happiness.

Not even my iPhone.

The Happiness Is DVD release party takes place July 30, 5-7pm, at Waterloo Records (600 N. Lamar). The film will then screen at the Alamo South Lamar (1120 S. Lamar) at 9:30pm; the screening benefits Mobile Loaves & Fishes. Both events are free, but tickets must be reserved in advance for the screening. For more info, see www.happinessisthemovie.com. Andrew Shapter, Happiness Is, Before the Music Dies