Michael Moore is hot for Austin. (But does he know how hot it is in Austin? Those signature flannels will never fly here.) He's best known for his day job as the Oscar-winning documentarian who delivered a Bush beat-down in Fahrenheit 9/11, but in his spare time, Moore runs the Traverse City Film Festival in Traverse City, Mich. The festival's mission, according to the website, is to show "Just Great Movies" – and "just great" is exactly what Moore thinks of Bob Byington and Ben Steinbauer, the two Austin filmmakers he recruited to take part in this year's fest.

In a very rare – and very flattering – turn, the festival invited Byington to screen not one but two of his films: Registered Sex Offender, which premiered at the 2008 South by Southwest Film Festival (see "Private Parts in Public Places," March 7, 2008) and his newest film, Harmony and Me, which has garnered great notices in its limited festival run. (Harmony and Me hasn't screened in Austin yet, but Byington tells me a local premiere will be announced soon.) Meanwhile, Steinbauer will be screening Winnebago Man, his cheeky documentary about the so-called angriest man alive, Jack Rebney, which premiered at SXSW 09 (see "The Watchmen," March 13) and has gone on to win a slew of awards. In addition to the screenings, the two directors will also teach a class on comedy and appear on an Aug. 1 panel titled Comedy, American Style. Panelmates? Larry Charles, director of Brüno, and Jeff Garlin, who co-stars on Curb Your Enthusiasm. High compliment, indeed.

So what is it about Austin and these two Austinites that's gotten Moore so excited? The director, currently locking picture on his newest feature, Capitalism: A Love Story, recently enthused via e-mail about the town and its talent:

"To me, Austin is a really great example of a close-knit American independent filmmaking community that shows the kind of collaboration and inventiveness that it takes to make great films outside of the studio system. You've got a guy like Bob Byington who has developed a very unique style working with the same group of people on his last few films, and his films feel very organic as a result. They're the kind of movies that can only be made if the cast and crew are very comfortable working together. And when you watch his films you feel like you're part of their group too – it's like he's letting the audience in on a big inside joke. Then there's Ben Steinbauer's film Winnebago Man, which is the funniest documentary I've seen all year.

"It's the kind of community-based filmmaking that I'd like to promote with the Traverse City Film Festival. I wanted to show the folks up in Northern Michigan that there are great American films being made outside of LA and New York. Who knows, maybe someday we'll be calling Traverse City 'the new Austin.'"

The fifth annual Traverse City Film Festival will be held July 28 through Aug. 2. For more info, visit www.traversecityfilmfest.org. To find out more about Harmony and Me, see www.harmonythemovie.com; for more on Winnebago Man, see www.winnebagoman.com.

Happy Accidents
That a car crash of a video shoot turned viral is only half the story. What a long strange trip it's been for 'Winnebago Man.' 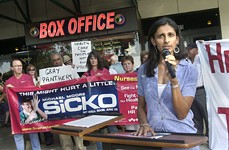