Contracting and Expanding at KLRU

Tweet
print
write a letter
The sour economy forced local PBS affiliate KLRU to make some hard changes last May. Reduced overnight hours, staff layoffs, production suspended on certain locally produced programs, and some well-publicized behind-the-scenes union blues made the future of Austin's public television look wobbly. While the dust has been settling in the aftermath of layoffs and budget cuts, it's not all business as usual at KLRU. Even before the new reality of a troubled economy, a few innovations have been in the works, and several more are on the horizon.

The most visible change for many viewers is the elimination of KLRU2 (for Time Warner Cable subscribers) and KLRU-G (for Grande Cable subscribers). Although Grande subscribers saw KLRU-G disappear earlier in the week, the void was only temporary. Starting July 1, KLRU-G and KLRU2 have been replaced with KLRU-Q.

Thanks to the digital conversion, KLRU-Q, the public television station's third multicast channel, is available to noncable subscribers. KLRU-Q joins the "main" KLRU channel and another pre-existing channel known as KLRU Create (which emphasizes cooking and craft shows) in part of an ongoing effort "to experiment with programming strategies that more fully use the station's existing digital bandwidth," says KLRU General Manager Bill Stotesbery. While still in formation, the new KLRU-Q is described as "an eclectic mix of PBS programs and other shows not seen on KLRU," according to online press materials. Stotesbery continues: "We decided to bring up our third multicast channel, available to everyone, to feature some programs not seen on the other multicast channels of special interest to Austin-area audiences." Best of all, "the cost is nearly zero," Stotesbery says of the change, adding that KLRU-Q will be programmed in blocks, with hopes of attracting new viewers, underwriters, and sponsors. Music, a block called Tea Time (British comedies), drama, and reality are only a few banners that describe the aggregated programming blocks that viewers can expect to view on the Q.

The children's programming that many parents have come to rely on will still be carried on the flagship KLRU channel. And while it's too early to announce, Stotesbery said the station is actively looking inside the KLRU vault to see what oldies and goodies stand the test of time to be brought back to the airwaves.

As far as returning to a 24/7 format, Stotesbery hopes that will happen at the end of summer. "Maybe earlier. We're not quite there technically," he says.

See our Screens blog, Picture in Picture, at austinchronicle.com/blog/pip for the new channel information for digital TV, Grande, and Time Warner customers. 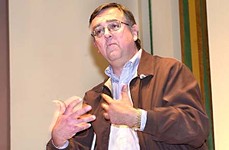 Media Watch: KLRU's Numbers Don't Add Up
The recession has hit at KLRU