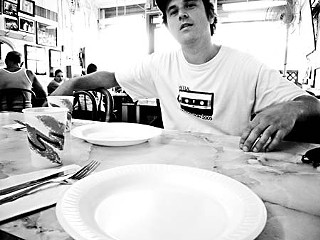 The title of Mike Sacks' new book on comedy, And Here's the Kicker: Conversations With 21 Top Humor Writers on Their Craft, sounds straightforward enough, but it really only hints at what happened when Sacks started talking with comedy greats from past and present, including Buck Henry, Harold Ramis, Mad magazine's Al Jaffee, and The Simpsons' George Meyer. Another 19 interviews didn't make the final cut; "some of them," says Sacks, a humorist and Vanity Fair staff writer, "were really quite awful."

These aren't quick chats, but rather the fruits of two years' research and around about 10 hours of interview time per subject. In his book, Sacks digs into the inner workings of the comic mind (a sometimes deeply troubled one) and into the inner sanctum of the writers' room, from Caesar's Hour to Saturday Night Live. He plucks practical advice on what not to do when trying to get a job (in case you were wondering, "it's not smart to send in a résumé on a Mylar balloon"). And every so often, Sacks fawns, if just a little bit. (Like you'd keep your cool talking to a guy who once wrote for the Marx Brothers.) Put together, And Here's the Kicker, which hits shelves on July 8, is a fascinating mix of cultural reportage, how-to, and hagiography.

Austin Chronicle: So how much are the humorists included in your book an indicator of your own comedic sensibility? Are these "the ones" for you?

Mike Sacks: I had carte blanche. I could pick whoever I wanted. Truthfully, a lot of them said no – Steve Martin said no; Albert Brooks said no; Tina Fey said no. A lot of women said no. But these are people that I just love. ... It just mattered to me if I liked their work and if they were willing to talk to me for 10 hours.

AC: Did your opinion of some of the writers change in the process?

MS: Um, yeah. I would say that in some cases my respect grew, and in other cases, it didn't. ... But some of these people are so consistent – Bob Odenkirk, Marshall Brickman, Mitch Hurwitz, David Sedaris – that I couldn't help but be awed by these people. Like, Larry Gelbart's been producing since he was 16 years old, and he's now in his 70s. And the people he's written for are Bob Hope upwards, Tootsie he wrote, M*A*S*H [the TV series].

Irv Brecher – he was 94 years old when I spoke to him. And that guy was absolutely amazing. He remembered his phone number from 70 years ago. And he was still, you know, funny and remembered stories. Just to be able to talk to people like that was worth it. ... It was just a bridge to another time ... to ask him what it was like to write for the Marx Brothers or [to be contemporaries with] Dorothy Parker or S.J. Perelman. It was just astonishing. And unfortunately that time has gone. With him dying, there's not too many left who have dealt with those classic humor writers. But it was so great to be able to talk about them as real people and not just as people one reads about.

AC: You mentioned Marshall Brickman, who used to be Woody Allen's co-writer. In your book, Brickman talks about the original cut of Annie Hall – I don't suppose you asked him if that original cut exists somewhere in a bunker?

MS: Yeah, I wanted to publish the full script in the back of the book. He said he was fine with it, and then he said, "But you just have to ask Woody." And I thought, "That's not going to work." So I asked Woody Allen's sister, who represents him, and she said no way. I just wanted to look at it, and he said he'd be willing to have me over just to look at it, but then, I don't know. I guess he changed his mind. I think it's the type of thing where they feel that it turned out so well as is that maybe the original script wasn't as good as people might have imagined it to be.

AC: There's also the moment in that interview where Brickman is talking about Annie Hall, and he says: "Who knows why that film works? I have no idea." When I read that, I couldn't decide if I should feel happy or completely dejected that even Marshall Brickman didn't know what he was doing when he did it, or how he did it.

MS: Right, well, I think his point is that even when you have a tremendous amount of talent involved, there's so much room for error that you never know how it's going to end up. And that one had a tremendous amount of problems: It was re-edited, rewritten, they had to go back for more shoots, and I think they were kind of surprised that it turned out to be this explosion. It just hit at the right time in the right way. You know, he's worked with Woody Allen before on movies that haven't been as successful. I guess it's always a mystery as to how something will turn out. ...

I think a lot of it is kind of luck. Todd Hanson [The Onion's head writer] – here's someone who was working washing dishes and was just doing this for fun, no expectations that it would lead anywhere. He wasn't studying humor in college – I don't think he graduated college. He was very talented, and he was lucky. He hooked onto a good thing at the right time, at the right place. I think a lot of these people will admit that they're talented, but they also admit that they know a lot of talented people that they came up with who are still waiting tables or working temp jobs or whatever. There's definitely luck involved with that.

AC: It was a little disheartening to hear someone like Larry Gelbart, who's had so much success, still sound so frustrated at the end of his career.

MS: It was. I felt bad for the guy, because, as you said, he doesn't have much time to spare, and he's working on these projects that never get off the ground, and you think, "Hey, if this guy is having problems, then anyone can have problems." But at the same time, it's sort of reassuring to hear that everyone is struggling at every level. ... There aren't writers who reach a point where they just sit back and relax and everything they write will either be published or produced. Even David Sedaris writes pieces that aren't published.

AC: What about the dream dead-person interview? The one that you wished you could have included?

MS: Well, I'm a big fan of Jean Shepherd. Have you ever heard of him?

AC: I recognize the name.

AC: Wait, he didn't write A Christmas Story, did he?

MS: He did. In fact, he was the narrator.

AC: Really? He had a great voice.

MS: He was a radio personality. He's a great writer. [He wrote] very, very funny stories about his childhood that are done in a very solid manner; they're not done in the nostalgic-type way. And he died not too long ago – four or five years ago.

But, you know, the reason I wanted to do this book, too, is because there are no books out there with interviews or an oral history from current humor writers. A lot from Your Show of Shows and things like that. So I didn't really wish to interview those who are past –it was more important to me to interview those who were going to be classic humor writers in the future, who might not have had a chance to be in a book yet and talk about their craft and the way they came up.

AC: Two "future classics" you spoke with are Stephen Merchant [co-creator of the BBC's The Office] and Paul Feig [Freaks and Geeks]. I bring those two up because Feig talks about comedy that's rooted in the pain center, and Merchant talks about comedy that hits the pleasure center. In terms of your own likes and dislikes, which do you gravitate to more – the painful comedy or the pleasurable?

MS: Well, I find painful pleasurable. That's what I was trying to ask both of them: Can't there be a pleasurable pain center? And Paul Feig said yeah, there can be, but no one's going to watch it – or not necessarily no one, but not to the degree that it would be a huge hit. There's always a small degree of people who are going to like that, but mostly people want to feel it in the pleasure center of the brain rather than the other center.

The humor that I like is usually connected to characters. It's authentic to their character, and if that character happens to be a loser and a sad sack, well, then that's just part of it.