Muck and maggots and food slopping down chins, or: The World According to the Original Chuck D 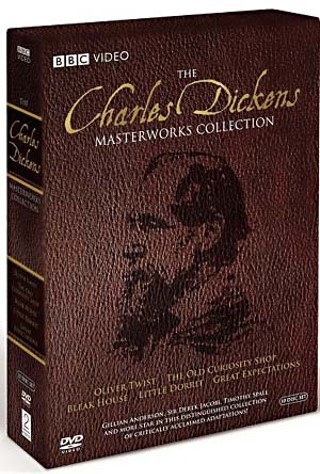 
When a review copy of this new Dickens monsterworks box set arrived in early May, the publicist nudged that it would make a dynamite Mother's Day gift. Ten discs later, I'd conquered the set in time for Father's Day, but the timing was just as inauspicious: There are very few mothers or fathers worth celebrating in these five BBC adaptations of Dickens novels; in truth, the brothers and sisters are absolute shits, too. It's left to surrogates to provide kindness and sometimes fortune – Great Expectations' escaped convict, Oliver Twist's Nancy, Bleak House's avuncular John Jarndyce – and where does that kindness get them? Dead and/or brokenhearted. Bleak house? Bleak world. The five films range in quality and watchability, but what stays the same are the fun-house grotesqueries: muck and maggots and food slopping down chins. The Old Curiosity Shop – earner of Oscar Wilde's famous slag, "One would have to have a heart of stone to read the death of little Nell without dissolving into tears ... of laughter" – is the shortest and least successful film in the set, while Oliver Twist is hampered by an inexpressive lead, and Great Expectations goes the opposite extreme with Pip played by future Fantastic Four-er Ioan Gruffudd as a sniveling overemoter. The last two films – and brilliant, the both of them – were scripted by the BBC's resident king of adaptation, Andrew Davies (Middlemarch, Pride and Prejudice), who grinningly admitted to an audience at the Blanton back in April that, as a 73-year-old man, he rather prefers writing in the voice of sparky young women. Makes sense, then, that the sprawling Little Dorrit and Bleak House are both anchored by smart, sensible young heroines. "Are you happy?" Amy Dorrit asks her sister, who snaps back, "What's happy got to do with it?" Not much, at least not in the debtor prisons and nonsensical legal institutions of Dickens' imaginings, but in lieu of happiness, cracking good drama will suffice.

Mistresses, Vol. 1 (BBC Warner, $59.98): This well-acted if overblown British soap follows four friends grappling with love and marriage; as the title tips, those terms tend to be mutually exclusive.