A Recipe for Revolution

'Food, Inc.' serves up some scary facts about food production in America 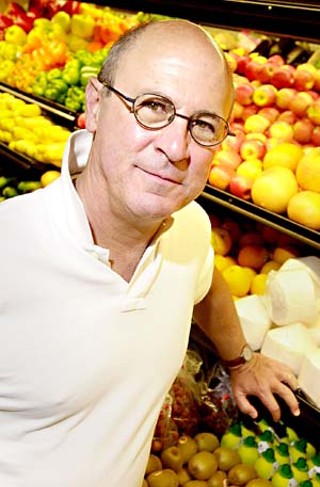 It began last fall with a standing ovation at the Toronto Film Festival. Then there was a premiere in Berlin that packed a 1,900-seat theatre. Then Martha Stewart arranged a screening for her food department and implored her Twitter readers to "see it please, listen to it, act on it." New York magazine reviewer David Edelstein wrote: "I gave up the thought of 'reviewing' the documentary and decided, instead, to exhort you: See it. Bring your kids if you have them. Bring someone else's kids if you don't." Even the U.S. Department of Agriculture – not exactly depicted favorably in the film – has requested its own screening. Variety wrote back in October that the movie "does for the supermarket what Jaws did for the beach." Food, Inc. may very well send people fleeing from their grocery stores this summer – but it seems poised to have the opposite effect on theatres.

The popularity of books such as Michael Pollan's The Omnivore's Dilemma and Eric Schlosser's Fast Food Nation has made it clear in recent years that the factory food system is no longer an issue confined to the bookshelves of vegans, environmentalists, and workers' rights activists. Food, Inc. is by no means the first documentary to tackle the topic, either – an increasing number of similarly themed efforts have been making the film fest rounds, including The Future of Food, Super Size Me, The Price of Sugar, and King Corn. But while each of those focuses on particular parts of a broken system, Food, Inc. manages to step back and examine the whole bloated thing. If there really is a broad audience out there ready to explore the downside to a food economy that's cheaper and more convenient than ever before, then Food, Inc. works as an extremely palatable primer on the subject.

The Austin Film Society and the Sustainable Food Center brought Food, Inc. to Austin for its local premiere on June 1 at the Alamo Drafthouse South, with Schlosser (who co-produced the film) and Robert Kenner, the director, in attendance. That night, as the sold-out crowd dined on farm-raised pork and Parducci Sustainable White wine, Austin's Sustainable Food Policy Board was holding a meeting across town at the Carver Library. Created to "improve the availability of safe, nutritious, locally and sustainably grown food at reasonable prices for all residents," the brand-new board hoped to solicit public input. So many people showed up that the 60 or so chairs in the room weren't enough to accommodate them, and those who spoke echoed the film's urgency. I'd spoken with Kenner earlier that day, and I couldn't help but think of something he'd said: "What I've realized is that there's a real food revolution taking place," he told me. "Something's going on. People are upset."

There's a scene in Food, Inc. that shows hundreds of baby chicks tumbling down a metal chute in a factory. Dazed, they spill off the end of the chute onto a moving conveyor belt from which a woman with gloved hands snatches them one by one, rams them headfirst into a blue ink stamp of some sort, and tosses them aside. It's a quick scene, and arguably not as shocking as others in the movie, which are full of cruelty not only to animals but to the land, to factory workers, to farmers, and to families. Moreover, it's not exactly representative of the movie as a whole, which actually tends to be rather cheerful and, cinematically speaking, pretty – with bright, saturated colors and landscapes that look like paintings. But this is the scene I think of every time I look at a menu now, wondering: "Where did this chicken come from? Was it traumatized in its former life?"

As Food, Inc. painstakingly illustrates, just about all of our food these days has been traumatized. Ninety percent of what you find in the grocery store – everything from your beef to your ketchup to your orange juice – contains some kind of soy or corn ingredient, and despite appearances, most of it comes from a small handful of companies. "What looks like this cornucopia of variety and choice is not," says Pollan, who narrates much of the film.

As illustrated in the documentary by a family struggling with diabetes and a limited budget, corn is so heavily subsidized that processed foods are cheaper to eat than real ones, leading to a nationwide dearth of nutrition so deep that one-third of Americans born after 2000 (and one-half of all minorities) will develop diabetes. "People say to me that it's elitist to think that lower-income families can eat healthy organic food," Kenner told me. "I think it's elitist that we subsidize food that's making people sick."

Meanwhile, the practice of feeding cattle corn instead of grass has led to the development of acid-resistant E. coli strains that have hit the water supply, tainting not just our meat but our spinach. Making matters worse, to kill the E. coli, companies are going to extremes: 70% of the burgers in this country have meat filler in them that's been run through ammonia.

The film also explores how industrialization has turned meatpacking into one of the most dangerous jobs around, and it makes the case that companies are knowingly hiring the most vulnerable workers they can find. At least one meat company has been known to bus immigrants in from Mexico just to do the work. "People all get concerned about, 'Oh, we treat the animals so badly,'" Kenner told me, "but what about the people making it? What about the earth? What about the people eating it?"

Before making Food, Inc., Kenner directed Vietnam doc Two Days in October (which won an Emmy and a Peabody); The Road to Memphis, part of Martin Scorsese's documentary series on the Blues; and various specials for National Geographic – none of which had much to do with food. His curiosity on the topic began simply: "I love to eat," he told me, "and I kind of find it a minor miracle, you know, where do these three meals come from?" Inspired by Pollan's book, he set out to answer his question, and in Food, Inc., he got more than he bargained for, not just in the breadth of information but in legal fees, which Kenner says cost more than his last 15 films combined. "What turned out to be true," he said, "is that I realized these corporations will do everything in their power to stop us from thinking about the food, to stop us from knowing how it's grown, stopping us from knowing what's in the food, and even stopping us from being able to talk about it freely. That we were being denied such First Amendment rights – that was my big shock."

There's a moment in the film when Kenner is speaking to Barbara Kowalcyk, whose 2½-year-old son died of E. coli poisoning after eating a hamburger. She has spent the years since his death lobbying Congress to pass Kevin's Law, which would give the U.S. Department of Agriculture the authority to shut down manufacturing plants whose products have been repeatedly linked with food-borne pathogens. He asks her how her experience has affected her eating habits, and she refuses to answer for fear of being sued by a notoriously litigious food industry (the same one that once locked Oprah Winfrey into a six-year court battle with a group of Texas cattlemen). At that moment, says Kenner, he realized he'd waded into far more dangerous waters than he'd imagined. "Lightbulbs went off," he told me. "I was like: 'Why am I making this film? Am I in trouble?' It was like venturing into doing a film on nuclear terrorism or something."

It isn't all bad news. Kenner also interviews Stonyfield Farm's Gary Hirshberg, who shows just how far organics have come now that Wal-Mart is knocking at his door. Meanwhile, Polyface Inc.'s Joel Salatin proves to be an inspiring spokesman for the feasibility of returning to the small-farm days of yore – and makes a case that it's okay to eat chicken.

After the Alamo screening, a woman in the front row was among the first to speak. "We're chicken farmers, and I just wanted to say thank you," she enthused. "I just want to go home and hug our chickens."

"Good!" said Kenner. "So many people say, 'I never want to eat chicken again,' after watching this film. And I'm thinking: 'That's not what this film is about. It's really about industrial food – I don't want to eat industrial tomatoes, no less industrial chicken.'"

With a freshly planted organic garden on the White House lawn and a Congress ramping up its focus on health-care reform just as Food, Inc. hits movie screens, the timing couldn't be more auspicious. The film no doubt has a part in the larger public discussion, helped along by backers Participant Media, better known for their role in An Inconvenient Truth's success. There's even supplementary reading material to be found in Food, Inc. the book (which has gone through four print runs since its release in May, said Kenner), and the film encourages viewers to visit www.takepart.com/foodinc. If all that sounds a little overwhelming, all you really need to do is follow Kenner's simple advice: "Buy from a farmer."