Austin troupe the Latino Comedy Project is up for a Daytime Emmy Award.

I used to hate watching TV in the summer. For a long time, there was nothing on except deadly reruns. And then reality TV came on the scene. For a while it was scary (Fear Factor, 2001), then it got fun (Queer Eye for the Straight Guy, 2003), and then it got smart (30 Days, 2005). Now it seems to have evened out. There's something for everyone when it comes to summer reality. But with the premiere of Nurse Jackie and the return of Weeds (both on Showtime), True Blood (HBO), Saving Grace (TNT), and Mad Men (AMC), summer TV is starting to have its own sheen.

On the local front, some recent news has made things look even brighter to TV Eye. First off, the return of Paul Saucido and Sonido Boombox on ME Television! Yes, the local Latin indie music and culture show is back – not that Saucido disappeared. Even after ME Television went through its meltdown (down but not dead, it seems), you could still see the intrepid Saucido online on various sites (including his own www.saucidoslant.blogspot.com), giving the word on what was going on around town and across the map in the Latin indie music scene. As for Sonido Boombox, it's the same setup – news and information, music blocks, interviews, and chisme about what's going on in Latino music and culture, Central Texas style. To inaugurate the return of Sonido Boombox, Saucido interviews Wil-Dog Abers of Ozomatli (who gave a great show in Republic Square last week). Guests on tap include San Antonio's Girl in a Coma, Maneja Beto (recently returned to performing), and Austin City Council Member Mike Martinez.

Sonido Boombox returns Friday, June 12, at 8pm on Time Warner Cable Channel 15. Encores air the following Saturday at 10am and 10pm, Sunday at 6pm, Monday at 2pm, and Tuesday at 10am. Ajua! (That's a Mexican version of "Woo-hoo!," in case you're wondering.)

Continuing with music slash TV news: I got this morsel of info that Austin's Latin hip-hop party band Los Bad Apples will have its insanely danceable song, "Cupcake," featured on Paris Hilton's My New BFF (MTV) on June 16. As my informant says, "everybody wants a bite of Los Bad Apples." It seems the band has caught the attention of other music coordinators, who are considering the band's tunes for other reality series such as The Real World: Cancun, The Hills, and Bad Girls Club. How did MTV find Los Apples? Music coordinators were literally looking for a song to underscore an episode about cupcakes, and now here I am, writing to tell the tale.

And finally, in what could be the most interesting bit of news to fall out of the sky, the Latino Comedy Project, led by Adrian Villegas, has been nominated for a Daytime Emmy. No, the LCP, known for some of the most gut-busting and edgy humor this side of loco, has not made a telenovela. Its nomination is for a campaign the company created and performed in for MTV Tr3s, the "most widely distributed TV network dedicated to today's bicultural Latino youth," according to press sources. The culturally relevant commercials and a couple of "rants" were made to relay to Latino viewers that "we get you" (the tagline at the end of each short segment).

"We didn't even know the Emmys had a category for whatever it is we did!" Villegas writes at the LCP website. "LCP member[s] ... were nominated in this incredibly sexy-sounding category: Outstanding Promotional Announcement – Institutional."

Other nominees in the category include campaigns created for MTVU, Nickelodeon's Noggin, The Ellen Degeneres Show, and a second MTV Tr3s campaign called "Tu Pride." Villegas, Danu Uribe, Guillermo DeLeon, Karinna Perez, Mical Trejo, Sandy Avila, and Nick Walker are among the nominated LCP company members. Several of the segments they wrote and performed in can be viewed at the company's website at www.lcp.org.

The 2009 Daytime Entertainment Emmy Awards will be telecast Aug. 30 at 7pm on the CW. Wonder if the LCP will get to sit near Susan Lucci?

A Rocky Road to Recovery
The lights are still on at ME TV, but is it a new dawn? 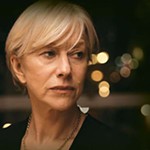 TV Eye
Where My Ladies At?