Will the Real Norma Khouri Please Stand Up? 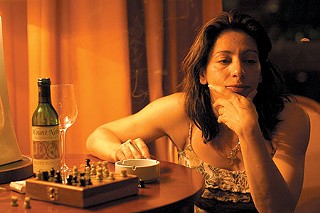 Anna Broinowski's documentary unravels the truth about Norma Khouri (pictured), whose bestselling 2003 memoir about honor killings in Jordan was exposed as a hoax.

Forbidden Lie$ opens with a close-up of a woman in profile pensively smoking a cigarette in a darkened room, film credits appearing within each exhalation of smoke. Digitally jump-cut to the foot of a staircase and Norma Khouri introduces herself: She's a 35-year-old Jordanian woman, a Catholic ("er, Orthodox"), a virgin who had a very difficult childhood with her own father and who, she says, finally snapped when her best friend, Dalia, was killed by her own father in an honor killing. At that point, Khouri decided that the story of these killings had to be told. Which she did in her bestselling book, Forbidden Love (also known as Honor Lost: Love and Death in Modern-Day Jordan), and subsequent publicity tour, presenting herself to sympathetic audiences everywhere as on the run from Islamic extremists who'd placed a fatwa on her head because of her stand.

Now, I must say that from the get-go, Khouri's Chicago accent and fluent American jive gave me pause about her claimed nationality, but it was only in 2004 that an Australian journalist blew her out of the water, revealing her to be a sham and her story a hoax. Norma Khouri was really Jordanian-American: Norma Bagain, aka Toliopoulos, a married Chicago (told you) real-estate agent and mother of two – and a person of interest to the FBI for alleged fraud.

It was at this point that Norma – then living in Australia with government protection – became a person of interest to Australian filmmaker Anna Broinowski (Helen's War, 2004). Broinowski – who says she'd spurned the book because when it came out during the run-up to the Iraq War it "stank of anti-Arab propaganda" – became keenly interested in "what kind of woman could be so brilliant that while on the run from the FBI was able to reinvent herself as she had, convincing the best minds in publishing and the media that she was telling the truth?"

Without spoiling the fun of the Hitchcockian cat-and-mouse game that ensued between the filmmaker and her subject, let's just say that an extraordinary expenditure of emotional capital and effort went into the making of what is essentially a profile of a con artist. On a meta-level, however, the film is an excellent metaphor for the doc-making process itself. For Broinowski, the film is more about the nature of truth itself than Norma's veracity: "Trust no one. Think first. Believe nothing you are told, especially if it is being presented as a 'documentary,' which in my opinion is one of the most constructed and artificial genres around."

Austin Chronicle: Did you decide to make this film as a portrait of Norma, an intriguing con artist, or to uncover the truth?

Anna Broinowski: Neither. I originally intended to help her clear her name, as she promised me that if I took her to Jordan she would prove that the dead girl in her book actually existed and that the book was not a hoax. Halfway through the shoot, when I realized she was conning me, too, I switched the film over to a portrait of an apparently pathological liar. I told her I had no choice and invited her to still film with me. I explained I didn't want to bury her all over again, the way the media already had. That I needed some more personal insights from her, to help me find a more redemptive ending. She agreed, and we filmed together one more time in Chicago.

AC: At what point in the film did you finally decide that you could not believe anything she told you?

AB: Never. I always felt there was an inkling of truth in almost everything she said – but that I would never be able to find it because it was so deeply buried in mountains of half-truths. However, in terms of realizing she was leading me on a wild goose chase, it was the first day of the Jordan shoot, when all the witnesses she'd promised she'd provide to my camera failed to appear.

AC: In the end, what is your assessment of who Norma is?

AB: Goodness – I have very little idea really. A smart girl born on the wrong side of the tracks, with enormous talent, a gifted storyteller who was never given the breaks – so when the world came calling and said, "If you are the Norma of the book, we'll give you a five-star celebrity lifestyle," she made her Faustian pact and said, "Yes, I am the Norma of the book." It was a lie, and she knew it, but she justified it to herself because she reasoned that spin was the only way to get the message about honor killings out into the public. She does genuinely care about honor killings – I think I should leave the summation to Norma – she says, "I did the right book the wrong way for the right reasons."

AC: What was your biggest challenge in making this film?

AB: Trying to stay sane – I failed at one point – and trying to deal with Norma in the most ethical possible way. Just because she was a proven liar and was lying to me, too, did not justify me lying back to her. So I tried very hard to stay stubbornly honest with her. I often told her too much, which enabled her to stay one step ahead of me with yet another plausible but completely fabricated story. My greatest fear was that Norma's mendacity would rub off on me and that I'd behave in ways I did not respect. I think I mostly survived – there was only one time that I deceived her on camera – and I told her straight after I'd done it. It's the moment where I string her along in the white room, making her believe I think Ghada is the "real Dalia." I then turn the tables and catch her out in her own lie by reminding her that her book was in fact already four-fifths written when Ghada was murdered. When I showed Norma this moment while we were recording the commentary together for the DVD, she just laughed and said, "I knew you were pretending – I just wanted to let you have your little moment."