The Future of Tonight 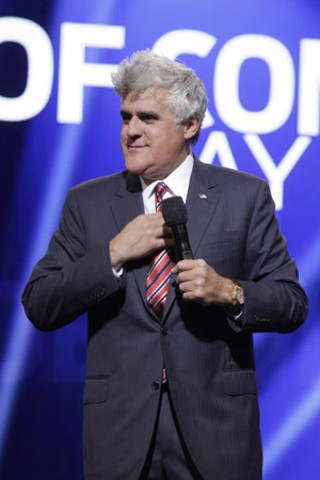 When he says goodbye to The Tonight Show, Jay Leno will be moving to prime time's prime real estate: Monday through Friday, 9-10pm. All together now: Whaaaa?

Following up on last week's "TV Eye," here are more highlights from the broadcast networks' upcoming fall TV seasons. This week, a look at NBC, CBS, and the CW.

When it comes to NBC, all roads lead to Jay Leno. The soon-to-be former host of The Tonight Show (Conan O'Brien takes the reins on June 1) is moving to prime time, Monday through Friday, at 9pm, in what is being called "not The Tonight Show." Instead, it's a comedy hour where Leno can tell jokes, show some of those funny newspaper clippings, and maybe interview guests. So the difference would be ...? At least NBC is not filling that hour – which is prime real estate – with reality fare, but Jay Leno? Really? As the schedule stands now, there is always something else I would rather watch than Leno. (The media trades are now reporting that Oprah Winfrey was first approached for the prime-time experiment. She turned down the offer – wisely, in my estimation.)

Winter Olympics coverage in February is the demarcation for what NBC is calling a "split season," with series time-sharing prime-time berths (as in Heroes starting the week off on Mondays in the fall, with Chuck taking the time slot midseason. Same thing with the new comedy Community and 30 Rock).

Leaving the peacock is My Name Is Earl, though the rumor is that it may jump to another network. Also gone is Medium, which has found a cozy spot over on CBS. New to NBC are the nurse-centered series called Mercy and Trauma (about paramedics) and a slew of series that lean toward the paranormal: Meteor, The Storm, The Listener, and Merlin. Saturday Night Live Weekend Update will take Earl's Thursday night spot, as well as filling in elsewhere as needed.

When it comes to dependable, you can count on CBS. But some of its new fare actually looks appealing. Two of the most charming women to appear on TV return in two new series: Jenna Elfman in Accidentally on Purpose (like Knocked Up, with a more appealing baby daddy) and Julianna Margulies as the wife of a disgraced politician in The Good Wife. She gets a great lead-in with what may be the sexiest new show to come out of CBS, NCIS: Los Angeles. This NCIS spin-off stars Chris O'Donnell and LL Cool J. Yes, it's one of those procedurals I dislike, but this one promises to skew toward political intrigue and covert operations. Jumping to a new home is Medium, sandwiched between Ghost Whisperer and Numb3rs on Fridays. Dropped from CBS are The Unit and Without a Trace.

There's a lot of time shifting in the CBS schedule in hopes of bumping some of its well-performing shows (such as How I Met Your Mother and The Big Bang Theory) into the top 10 spotlight.

The still-nascent CW continues to gun for the youth demographic with returning prime-time soaps Gossip Girl, 90210, One Tree Hill, and the popular reality series America's Next Top Model. Rumors of the Gossip Girl spin-off were just that, for now. Instead, another TV remake is in the works with an updated version of Melrose Place. New series include The Beautiful Life, about the backstage machinations of high-profile fashion models, and banking on the current Twilight craze is The Vampire Diaries. Supernatural and Smallville also return to the netlet, but Everybody Hates Chris and Reaper (sniff-sniff) do not. The one series that looks like it has some gravitas is the midseason drama Parental Discretion Advised, about a young woman who goes in search of the dad she never knew and is unsure what to make of the slacker she finds.

So, there it is – down and dirty. What will be the next big thing to watch? As always, stay tuned.

TV Eye: Ch-Ch-Ch-Changes
Uh oh. Turns out Jay Leno's not going away after all.