Director Pete Docter on the intersection of uplift and melancholy

Animation has come a long way since J. Stuart Blackton directed what is widely regarded as the first animated film, "Humorous Phases of Funny Faces," 103 years ago. From there on out – and long before Walt Disney introduced a spindly rodent named Mickey – filmed animation exploded at an astonishing clip. Not only was it, like cinema itself, a new art form, but the sheer breadth of imagination and often surreal artistry that marked the art form's earliest years has only occasionally been equalled since. And from the beginning, there was a thematic thread of sorts: reel escape, from the mundane realities of an often harsh real world.

George Herriman's Krazy Kat, initially a comic strip, went 'toon in the midst of the Great War. Winsor McCay's fanciful strip Little Nemo in Slumberland made the jump to real-movement as well. And one thing these early cartoons had in common with the parallel emergence of motion pictures was a whimsical penchant for exiting reality, leaving the cobbles and gutters behind for airships, dreamworlds, and seeking a vantage point far above reality. A recurring theme in both early film and animation: the lighter-than-air exit afforded (frequently to comic effect) by ... balloons.

In that tradition – of Buster Keaton's live-action "The Balloonatic" (1923) and Ub Iwerks' animated short "Balloon Land" (1935) and McCay's dreamy, cloud-shrouded Slumberland – comes Up, Disney/Pixar's enchanting new animated feature, which completely abandons logic and reason in favor of gorgeous, candy-colored uplift. Literally. It's the story of elderly, life-soured curmudgeon Carl Fredricksen (voiced by Ed Asner) who turns his home into an airship, via hundreds of helium-filled balloons, and sets out on one final adventure after the passing of his beloved wife. Up is by far and away Pixar's most ambitious, eclectic film – whole sequences pass with little or no dialogue, buoyed along by some of the most imaginative airborne visuals since, well, the dawn of animation. It's modern animated imagery in its most pure form and a welcome respite from the increasingly cookie-cutter use of CGI animation and overplotted, underwhelming actioneering. Up meanders among the clouds and goes where it wants to go, which is more often than not where you least expect.

After the runaway success of WALL-E, The Incredibles, and Pixar's seemingly endless end-run around the Disneyfication of American animation (of course, they're now owned by the Mouse), Up director Peter Docter and writer/co-director Bob Peterson were given the green light from Pixar founder John Lasseter for whatever they could think – ahem – up. Docter had previously directed Monsters, Inc. and co-originated the story idea for that film as well as WALL-E and Toy Story 1 and 2.

This time out, however, Docter and Peterson struck upon the borderline subversive idea of a grumpy old man in a floating house. No wisecracking sidekicks, no apparent marketing tie-ins, but featuring the death of a main character within the first 12 minutes and an epic journey of emotional and spiritual rescue. Add to that comic killer canines, a fantastical 1920s-era zeppelin, ingeniously obscure sight gags, and more than a little melancholy, and at any other studio that initial green light would probably never have made it past amber.

"Bob Peterson and I," relates Docter, "were given the opportunity after Monsters, Inc. to just sit in a room and develop ideas. One of the things that kept coming up was this idea of escaping. I think there's a reason we become animators: We draw because it's scary to talk to people, so the idea of just getting away from everybody was really intriguing.

"One of the images we came up with was this floating house, and then the other thing that kind of paired with that was the idea of doing something with a grouchy old man character. So we put those two ideas together and began asking questions: How did he get in the house? Where is he going? And that's what the film grew out of."

Clearly, this isn't your usual Pixar film, if there even is such a thing. (A fact noted and fretted over early on in Up's production by Disney's marketing division, which – despite the fact that the film was the opening night feature at the prestigious Cannes Film Festival – has puzzled over how best to pitch the film, or even at which demographic to aim it.)

"The overriding principle for us, at Pixar, is to do different stuff," Docter says. "[Up] was fun because this film is probably the furthest we've gone so far in terms of stylization and caricature, and I think it was what the story needed to really work."

Running through nearly every rainbow-flavored frame of Up is a palpable yearning for escape, for flight, but it's pinned to the twin realities of both gravity and the grave. There's a special strain of sorrow at work here – the rueful yearning of Chaplin's equally fanciful Tramp, or Buster Keaton's stone-faced stoic. Which isn't to imply that Up is a downer.

"There is a certain melancholy to the film," says Docter. "And I think, looking back at, say, Dumbo, most of my favorite films have had that kind of deep feeling to them as well as all the humor and fun. Dumbo was definitely a huge influence. It's such a beautifully simple film and yet every moment allows for fun within that moment, you know? The clowns, the pink elephants on parade, the crows – there's all these different set-pieces, and you let the characters come to the fore and have fun with them. And that's what we were trying to do with Up."

Up opens in Austin on Friday. See Film Listings for review. 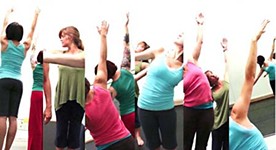 Up, Down, Under and Through
This strong program of independent dance deserved to be seen by more people