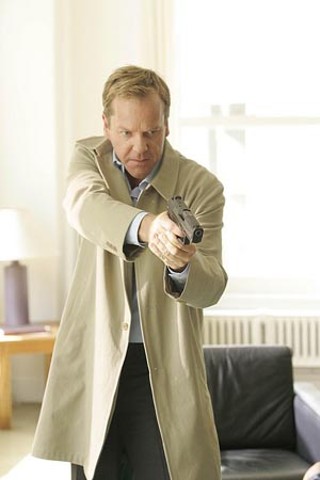 We’re about to enter a long summer of reality programming. Know this, Jack Bauer: You will be missed.

It's finale time on TV. While I've been dying to comment on some of them, I've found that to be dangerous. With many people recording shows for later viewing, I have been hand-slapped one too many times for spilling spoilers and ruining the fun. So, instead of recapping, I'm going to look forward. What is in store for TV viewers this summer?

First off, reality series. Yes, can't get enough of those family reality series where a D-list actor gets his family on camera. This time around, Lorenzo Lamas invites viewers into his home, while the kids from Keeping Up With the Kardashians will have their own show, Kourtney and Khloe in Miami. I was really hoping it would be Kourtney and Khloe in Kalamazoo, but they didn't consult me.

Producers of The Bachelor are debuting a new reality series about plump women looking for love in More to Love (Fox), while Oxygen brings plus-sized contestants to a show that sounds like a cross between The Biggest Loser and Dancing With the Stars called Dance Your Ass Off. Do I really need to explain?

Now for the good stuff:

True Blood (HBO) returns for its second season in July, while season three of Mad Men (AMC) went into production this week and will premiere in August. I don't know any Mad Men fan who is not pining big-time for the return of this fine series, particularly since chronologically, it will cover a pivotal moment in history: the assassination of John F. Kennedy. It's all hush-hush whether that bit of iconic history will play in the foreground or background, but whatever direction series creator Matthew Weiner steers it, it's hard to imagine it will disappoint.

In other Mad Men news, a new face is coming to the Sterling Cooper offices: Jared Harris. Harris has been popping up all over the screen for the last two years – Law & Order: SVU (NBC), Fringe (Fox), The Riches (FX). The English-born actor has a knack for playing brilliant but sleazy characters who can make your skin crawl. He will join Mad Men for a 10-episode arc in season three, playing Lane Pryce, Sterling Cooper's chief financial officer.

If you managed to miss the Mad Men season two marathon, it comes out on DVD this July.

For your viewing calendar, here are the notable finales. All are season finales unless otherwise noted:

May 15: After four seasons, brothers Lincoln and Mike finally find their way out of prison, or back in, in the series finale for Prison Break (Fox). I don't know – I stopped watching after the first season. I wish I would have continued now that I hear that Kathleen Quinlan signed on as their crazy mama, hell-bent on destroying the world, shooting her son Lincoln and then grinding her heel in his wound. Even the imperious Eloise Hawking didn't do her boy, Daniel Faraday, that bad over on Lost.

May 17: The tribe speaks for the last time this season in this installment of Survivor: Tocantins (CBS). The winner will be announced, everyone dances under confetti, then the winner is picked apart by the losers between recaps and clips from the season. Good times. On ABC, season five of Desperate Housewives comes to a close in an episode viewers are forewarned to watch till the very, very end. And on the season finale of Fox's The Simpsons, Homer goes anti-immigrant.

May 18: Yes, it takes a lot to suspend disbelief in season seven, yet Fox's 24 is still addictively watchable. Will Jack Bauer survive his exposure to the deadly anthraxlike gas? Well, seeing how series star Kiefer Sutherland is signed on for another season, I'm thinking yes. That, and they let his daughter, Kim, procreate. I'm guessing she saved the child's umbilical cord and some antidote will be concocted from that – the only good reason she wasn't mauled by that mountain lion a few seasons back.