Making 'Room' in the Cult Canon 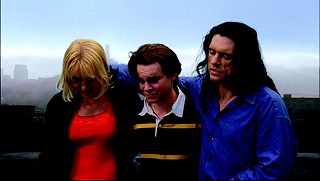 Tommy Wiseau (right), director and star of 2003 flop The Room, will appear at the Alamo Ritz on May 6.

Tommy Wiseau, the enigmatic director, star, and co-executive producer of 2003's independently shot The Room, is emphatic when it comes to defending his hypnotically off-kilter un-mellow-drama. Its rapidly expanding cult audience ranks the film right up there with Troll 2 and Plan 9 From Outer Space in terms of exquisite awfulness, but The Room – a bizarre love triangle of red-hot passions and stone-cold line readings – is far from the worst movie ever made ... or, at least, so says Wiseau, speaking from his home in Los Angeles in the same syntactically garbled Eastern European patois he uses in the film. Wiseau says it's French-ish, by way of New Orleans, but it sounds more like Udo Kier talking around a mouthful of loose fangs.

"I'll be honest with you," says Wiseau. "People don't want to give me credit for only one reason, and that is because they know, these critics who are part of a big elite, that what I am saying to you is, 'When the credit is due, give the credit.' Nothing happens by accident if you make the movie, especially if you look at the format."

"Yes, in this case, The Room, we are shooting on 35 millimeter as well as HD, and again, that was not accident. The reason for it was because, long story short, people were confused, seven years ago, about when to use the HD. We did not have the info that we have right now, as you know. The Room is only feature movie shot in two format at same time. I'm just telling you because this is the fact!"

Does Wiseau claim Godard as a direct influence on his work? Does he claim any cinematic precursors?

"I influence myself; that's number one. I'm consistent with my answers. However, to answer your question, I'm fond of Tennessee Williams, Orson Welles, and the others. Directing is a provocation of the director directly to the audience, and the audience are sucking into it. It's extremely difficult to do. [Regarding Godard] I think I saw a couple of his movies, but you know, I am not familiar [with] his work so much, but I think I saw one of them."

It's true: There are no parallels or precursors to The Room. With characters who enter and exit scenes as though they were auditioning for Seinfeld on acid or who drop narrative bombshells (such as, for instance, cancer) in one sequence only to have the crucial plot point never mentioned again, the wild world of Wiseau is more surrealist masterpiece – unintentional or otherwise – than most critics might like to admit. But you have to wonder if Wiseau is at all peeved that so many people consider The Room to be literally the worst film ever made. (The suspicion, born out of a hastily tacked-on "making of" chat that accompanies The Room's DVD release, is no, he isn't.)

"You see, I believe in the Stella Adler method. I'm not the method actor, but I will do anything to act – I'll be honest with you. My question was, to myself, how to provoke the audience that will be different. The Room is totally different cookie-cutter from Hollywood. I studied Orson Welles! You have to do research. But again, I love the interaction. That's what The Room is about. You cannot compare it to a regular movie because it was not designed that way."

ColdTowne Theater presents The Room with Tommy Wiseau in attendance on Wednesday, May 6, 7pm, at the Alamo Ritz. For more info, visit www.originalalamo.com.