Happy Together, and Fallen Angels 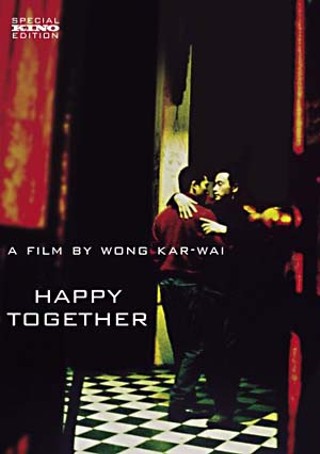 
Is there any contemporary American director who can so effortlessly invoke the essence of tragic love and endless loss as easily as Hong Kong's Wong Kar-Wai? In terms of sheer, unfettered emotions, maybe the closest we Yanks have come has been through the cracked, heart-bent looking glass of Hal Hartley (and his much-missed, vastly underrated muse, Adrienne Shelly). Quentin Tarantino is a more obvious echo – his Rolling Thunder Pictures distro outfit gave a full-on theatrical release to WKW's seminal Chungking Express way back in 1996 – but there's simply no American counterpoint to Wong's literally breathtaking imagery. You gasp, and then the goose bumps come, and then the next thing you know, you're hanging out in some twilit greasy spoon at 2am, night after night, hoping the violet snap of the bug zapper outside will flash across the sudden storm-wet parking lot pavement with enough neon crackle and spark to catch her (or his) wandering eye, the girl (or guy, maybe on the run, almost certainly with a gun) of cinema's best, most visually arresting, post-Godardian dreams. It never happens much outside of prehandover HK, sure, but what the hell: Maggie Cheung would wait until time bent backward and delivered up Leslie Cheung. Wouldn't you?

Kino's special edition of Wong's 1995 Fallen Angels is in every way superior to its 1998 DVD release. The story revolves around an icy-cool killer (Leon Lai Ming) and the equally amoral femme fatale (Michele Reis), who acts as his agent-cum-existential heart bomb, but it was originally conceived as part of Chungking Express, only to be cut loose at the last moment in consideration of length, tone, and the director's notoriously perfectionist editing concerns. 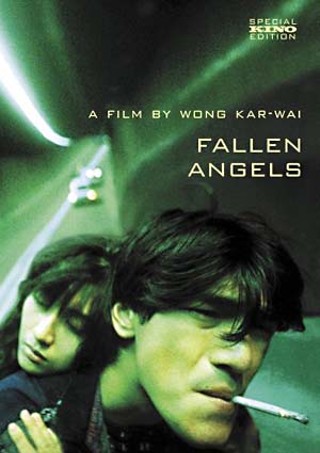 For all the dog-caged emotions that flow throughout the film like a crimson oil slick reflecting off that omnipresent gutter moon, Fallen Angels, in particular, owes its naked alley-cat croon to the director's longtime director of photography, Christopher Doyle. WKW may boil the blood (or, more likely, simmer it down into a fine, heady, heartsick stock), but it's Doyle's eye for the anxious nightscape humidor of Hong Kong that blows your mind and renders you, for a little while, as erotically charged and casually craven as this pair of dreamy love cats, prowling as they are around and around the riotously color-drenched Chungking House Deluxe Hotel.

Kino's provided a wealth of extras, too, not the least of which is a trio of behind-the-scenes featurettes, the most mesmerizing of which focuses on Fallen Angels' erotically charged final scene: Reis zoning out, in extreme close-up, with egg noodles drowsing up from chopsticks to pink lips while her man becomes unfocused and bloodied behind her.

Doyle, speaking on a commentary track about Reis' emotionally explosive performance and how such strange, evocative scenes were finally achieved, says it best: "It's not just film stock or lighting or filters or the sense of the scene. It's really about trust and bravery, you know?"

Happy Together, shot directly after Fallen Angels but not released in the U.S. until 1998, is everything the director's previous film is not, but more so. Set in Buenos Aires, Happy Together stars Tony Leung and Leslie Cheung (both returning from Wong Kar-Wai's swordplay phantasma Ashes of Time, recently re-released theatrically in the U.S.) as the gay couple who've had enough of each other, but not, really, enough. It's a love story in decline, surrounded and enveloped once again by Christopher Doyle's sumptuous cinematography. Wong Kar-Wai being, well, Wong Kar-Wai, the visuals ricochet from blunt, brusque black and white to supersaturated signage, the better to invoke the broken demons of these two turbulent men as they slowly slide into mutual mental and sexual combat.

Happy Together is probably Wong's most assured (yet no less borderline avant-garde) film up to that point, and the collision of Eros, Thanatos, and hot, hot lust that boils up around nearly every sequence makes his recent American debut, the lovely but emotionally stillborn My Blueberry Nights, seem like yet another terrific argument against HK filmmakers (we're talking to you, John Woo) trekking over Hollywood way. Passionate and passionately shot – stories of endless retakes and colossal budget overruns on Happy Together have become the stuff of legend – this almost acts as a reality check against the more melodramatic neon-lit capers 'n' caterwauling of his previous films.

Still, remastered from an HD transfer (a relative rarity in HK films until now) and with a boisterously sensual Dolby 5.1 stereo surround track – the better to capture all those sweaty tangos – the elegiac, steamy Happy Together is the sight and sound of Wong maturing out of the beautiful HK grime and into the bright, Argentine night. No matter where he and partner-in-grime Doyle find themselves, however, it's always the most arresting place the audience will find itself, shy of a time-ticket back to prehandover HK.