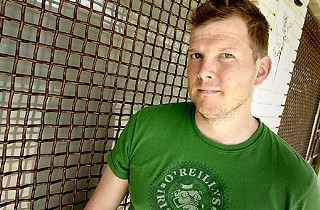 Austin filmmaker John Bryant has either directed ("Momma's Boy"), crewed (the Duplass brothers' The Puffy Chair), or acted (the Zellner brothers' Goliath) in some of the best of, for want of a better word, so-called mumblecore filmmaking. With The Overbrook Brothers, a poignant, gently humorous road movie about two sparring siblings (played by Nathan Harlan and Mark Reeb) who discover they're adopted and set out on a life-changing journey to discover the truth behind their biological origins, Bryant ups the emotional ante considerably – not least because there's precious little mumbling to be heard – and proves that the only thing at the core of his filmmaking is heart, pure and simple and sometimes sad.

"I'm kind of of two minds [regarding mumblecore]," says Bryant. "Honestly, I feel like a lot of interesting things have come out of it, and I've learned a lot from it. But I'm also a real big believer in plot and story. I guess the thing I like about mumblecore is the naturalism of it. And I kind of like the fact that it's all about non-star-driven indies and can gain an audience in that way. A lot of time, the acting is what gets overlooked by both full-time directors and beginning ones, too. [With mumblecore] you strip away all the other extraneous aspects of filmmaking, like explosions or great lighting and great composition, and you just strip it all down to the essence of bringing the camera to the actors and letting them shine. So in that regard, I think it's a blessing."

"The first seed of it all came from when [co-writer] Jason Foxworth and I were driving through the desert in Palm Springs and talking about our families. We decided we should do a family-type story, and I had an idea that came from something that happened to me when I was 4 years old: My brother had convinced me that I was adopted. I was crying, and I remember my mom was trying to console me, but my dad was across the room laughing. He thought it was funny, but, I mean, I was traumatized by the whole thing. So Jason and I thought, well, what if we took that idea, this dynamic, but made the brothers as being in a state of complete arrested development in their 30s? And then we went off and did a short ['Momma's Boy'] based on that."

Added to that was the fact that Bryant's girlfriend had been searching for her biological parents in real life for years, a quest that, as Bryant recalls, ended up becoming "a pretty frustrating experience."

"When parents show favoritism towards one child – and I've seen this happen before – the other children are just at each other's throats in that pecking order, trying to gain love and affection and/or attention. So [in The Overbrook Brothers] these two brothers are just banging their heads against the wall while on this journey until eventually they realize they've got to reach out to each other if they're going to get anywhere at all. That was kind of the basic idea behind the film. It's weird when you're writing a script like this one. I try not to think too much about it and have amorphous ideas that are kind of inchoate, and then, over a series of drafts, the story begins to take shape and you realized what you're going after."

The screenwriter's job, like all writing, is essentially a one-man/one-keyboard operation, a fact that's not lost on Bryant, whose work with longtime friend and frequent collaborator Foxworth has resulted in a useful narrative back-and-forth that, ultimately, makes for a better, more emotionally satisfying story.

"Writing is a very lonely process, so there's something about having someone there with you that makes it easier. And honestly, for me, just getting started takes a lot of confidence and motivation and delay, so having someone there to say, 'Okay, we're going to just write a crappy first draft and then get better from there' makes the whole process easier, you know? I think if you're on the same wavelength, especially when you're trying to do something like this film, which hopefully has some funny moments, then having a co-writer is great."

Kind of like having a brother-in-screenwriting, minus the passive-aggressive interplay of the brothers Overbrook, Bryant's cinematic sibling rivalry is less mumble, more humble, and altogether real.