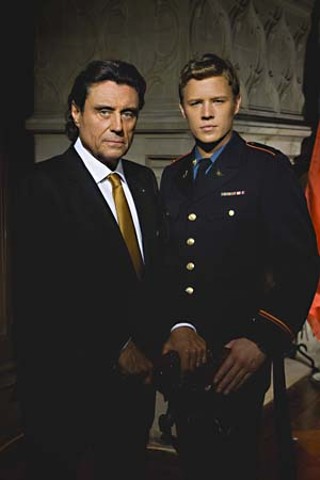 It's been a long time since I felt this way about a broadcast TV show, but after watching Kings, the new drama on NBC, I have to say, I'm baffled. I can't decide if I like it, but I do know it's unlike anything I've ever seen on TV.

The series is loosely based on the biblical story of David (most notably, the David and Goliath story), set in the present – or near present. Kings is also a bit of speculative fiction, proposing what it would be like if the U.S. (or someplace very similar) were under monarchy rule.

The series stars Ian McShane (Deadwood) as King Silas Benjamin, the longtime ruler of Gilboa. His land and people have enjoyed prosperity since overcoming the nearby kingdom of Gath. But peace is tenuous, with tensions flaring between the two nations every few years. It is during one of these flare-ups when the young soldier named David Shepherd (Christopher Egan, Eragon) makes a bold move at the front line, facing down Gath tanks (the Goliaths, in this version of the tale) in order to rescue some captured soldiers. What he doesn't know is that the king's son, Jack Benjamin (Sebastian Stan, The Covenant) is among the captured. David is then summoned to Shiloh, Gilboa's capital, to have his bravery celebrated. David is overwhelmed by the affluent world, starkly different from his idyllic life in the Gilboa countryside, but he soon discovers he has skills that may serve him well in a place where greed, power, conniving, and backstabbing are as useful as knowing which fork to use at a dinner party.

As King Silas, McShane is just this side of buffoonish. That's a compliment. It would be so easy to lapse into high melodrama, as when King Silas tells his subjects (every chance he gets) a fanciful tale of how butterflies descended upon him when he was tired and forlorn on the battlefield, making a "living wreath" upon his head – a sign from God, he says, that he was chosen to lead. When he witnesses this same thing happen to David on the grounds of his castle, the extreme close-up look on McShane's rumpled face is somewhere between malice and "oh no, he di'int." Priceless.

If you know the story of David, you have a good idea of where Kings is going. If not, no worries. Egan's bewildered and earnest David provides the perfect point of view to travel through this uncharted TV territory. Allison Miller, Susanna Thompson, Wes Studi, Eamonn Walker, and Dylan Baker co-star.

The drive takes place Saturday, March 28, from 9am to 3pm in the LBJ Library parking lot at Red River and Dean Keeton. For more information, e-mail the Student Engineering Council at service.sec.ut@gmail.com.

As of this month, this is my 10th year writing "TV Eye." When I took this gig, I thought it would last a year, and just when I think it's time to quit, some new development in the media landscape piques my interest again. But the other thing that makes this job enjoyable are the readers who contact me, sometimes with praise, often with criticism, always with interest. To illustrate, here's a recent voice-mail message, sent anonymously, after reading my review of Castle and my near-ecstatic swooning over series star Nathan Fillion earlier this month:

"I do not have a computer, but I read your column, and I have to say, my goodness, someone else noticed the gorgeous Nathan Fillion! ... I think he's a real dreamboat, and I'm almost 80 years old. So, thank you! That was kind of fun. ... I might even look at Castle. Bye bye!"

My peeps never cease to amaze me! Thanks for your calls, your letters, and your voice messages, and thanks for reading "TV Eye." 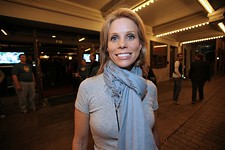