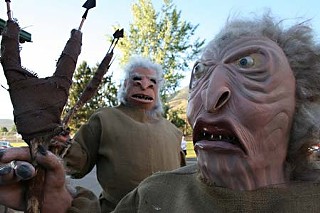 If you've never seen Claudio Fragasso's 1990 film Troll 2, stop reading this, go rent it from your favorite indie video store, watch it, recover from the experience (if you can), and then come back here. Seriously: Go. Now.

Michael Paul Stephenson, as you now know, starred as 10-year-old Joshua in Troll 2, a film so jaw-droppingly, mind-searingly bad that it has, over time, become the Citizen Kane of crappy filmmaking misadventures, edging out Ed Wood's iconic Plan 9 From Outer Space as the most endearingly incompetent film ever made. Best Worst Movie, Stephenson's documentary on Troll 2's unlikely transformation from unrentable VHS shelf-warmer to genuine cult film with a fanatically devoted fan base, is a hoot, and it goes a long way toward explaining why, while a lot of films are just plain bad, a tiny handful – and Troll 2 in particular – rise above their gutter status to become, against all odds, genuinely entertaining mistakes of cinematic nature. Like the carny's fake-bearded lady and the alligator boy with the obvious zipper running up his back, freak shows such as Troll 2 (and Best Worst Movie) succeed and survive via the only real thing they've got going for them: heart and the delusion of 24-frames-per-second excellence.

"I think the biggest thing that attracted attention to Troll 2," says Stephenson, "is that it's genuine and sincere. It was never the director's intention to make a so-bad-it's-good type of movie. Claudio came to America and made the film he wanted to make exactly the way he wanted to make it, and, as actors in the film, that was what our understanding was. We were expecting this to be a good horror film."

Of course, with an all-Italian, non-English-speaking crew directing a cast of inexperienced Yank pseudo-actors in Utah, the resulting film – which, it must be said, is devoid of trolls – was bound to be, um, fascinating, but no one involved in the production, least of all Stephenson, expected the inane train wreck that was the film's final cut.

"Growing up, I was dreadfully embarrassed about Troll 2 and never even wanted to think about it. I remember I would shudder when I went into video stores with friends because I was terrified that we would come across my movie. I just hated it."

So how did Stephenson finally learn to embrace his inner (and outer) troll?

"I started getting MySpace messages from fans of the movie, one or two, here and there," he explains. "At first I thought it was some kind of joke, but then someone sent me a photo of a Troll 2 fan party where they had dressed up and made all of these green desserts and food. I remember just staring and staring at the picture and thinking, "Why?!" These people made all this stuff, clearly enjoyed the movie, and they all looked so incredibly happy. Two days after that, I woke up in bed, turned to my wife, and said, 'I'm the star of the worst movie ever made.' And I was pretty happy about it. So, in short, it was the fans and their genuine love for the film that won me over to my own film."