Two takes on the bromance, indie vs. studio 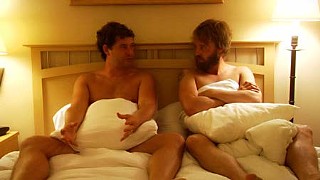 Humpday is not your typical love story. In fact, it's not a love story at all. It's a like story at best: an awkward like story. College friends Ben and Andrew reunite after years of traveling their own paths. Ben made his way to a wife and a 9-to-5 job, while Andrew has traveled the world exploring more artistic avenues. An evening of drinking leads to a pact that in turn leads to a game of anal-sex chicken that dominates the film's action.

Insecurity with the characters' respective lots leads to a mutual agreement to make a soft-porn film starring the old (and straight) friends. Sounds unbelievable? In the capable hands of director Lynn Shelton and actors Mark Duplass and Joshua Leonard, the final product is a thoroughly convincing piece of expected awkwardness and unexpected humor. Case in point: Ben and Andrew face off and struggle for dominance on the basketball court. The scene is both dramatic and hilarious, because the tension is palpable, but the basketball playing is laughably abysmal. Shelton assures me that this is not a far cry from the abilities of the actors themselves.

Actors have always come first for Shelton, who talked to us from her home in Seattle, and this film started in a similar manner to last year's Shelton-directed South by Southwest premiere, My Effortless Brilliance: with a premise and an actor in mind. She began Humpday with a desire to explore how even platonic relationships can sap individual identity and with Duplass in mind as the lead. "It doesn't mean it's a one-character movie," says Shelton. "It just means that everything gets cast around that person and spirals out."

From there, Shelton and Duplass began thoroughly defining characters with expansive backstories and establishing scenes and story arcs to give the scriptless shoot clear direction. "I really like structure and to know exactly what's going to happen ... how each scene is going to feed into the next," explains Shelton. Add to the flexible script work a bare-bones shooting style (often with Shelton holding the second camera) and protagonists born of the individuals playing them, and an endearing and naturalistic film emerges. A film populated with highly identifiable people putting themselves into awkward positions that feel less out of the ordinary than they should.

The finished product became difficult to categorize. The premise was comedic, but dramatic elements reared their heads often. There were no proper jokes, and the actors played everything straight. "I didn't know it was going to be a comedy until Sundance," says Shelton. The big laughs from Park City and the new title of "comedic director" made Shelton honey to the Hollywood bees. Managers calling her a female Judd Apatow or pushing the script for the next Seth Rogen vehicle made Shelton cautious of the studio system. "I'm hoping to have one of those two-tiered careers," clarifies Shelton, "where I can open myself up to more commercial possibilities without losing my integrity but still be able to make films on the scale that I like."

However, a $20 million budget means more problems and stress for a less-is-more filmmaker. "I didn't start making movies this way because it was the only way I could afford to," Shelton says. "It just turns out that this way of working – [which is] going to make the work better – is also affordable. It's a happy coincidence."

Surrounding herself with cast and crew whom Shelton knows and can have fun with is paramount. The setup for most of Humpday's shooting feels more like a house party with a set upstairs and editing room and greenroom in the basement. Just add a keg, and Humpday's bromance is complete. "Making movies is too hard for it to be an unpleasant experience," says Shelton. "When it's fun, there's nothing more fun than making something creative with a group of people. It's like drama camp or something." – James Renovitch 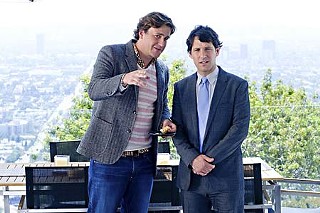 Breaking the Buddy Movie Mold: 'I Love You, Man'

Continuing its recent trend of showcasing some of the smartest comedies to come out of Hollywood, this year's South by Southwest Film Festival will open with John Hamburg's unique buddy comedy, I Love You, Man (which opens in theatres nationwide March 20). In it Paul Rudd plays Peter, an affable real estate agent who proposes to his girlfriend (played by Rashida Jones) but can't find a best man for the big day due to his lack of guy friends. This leads Peter on a string of "man dates" which go horribly awry – that is, until he meets Sydney (Jason Segel), a likable loner who builds such a tight bond with Peter it begins to affect his engagement.

No stranger to awkward comedies – his debut feature was the now-cult-favorite Safe Men, and he penned the Meet the Parents franchise and directed Along Came Polly – Hamburg believes his latest has a more realistic feel than his pervious work. "It's pretty easy to get friends when you're in high school or college because you're all stuck together," he says. "But when you get out of college, you go on your own path, and there's no easy way to meet people. I do think a lot of people in their 20s and 30s wake up one day and go, 'What the hell happened?' I thought that was very fertile ground for a comedy."

Hamburg first caught wind of the script about six years ago, back when "bromance" and "BFF" weren't in the popular lexicon. Producer Donald De Line bought the spec script written by TV scribe Larry Levin, then titled Let's Make Friends, for Hamburg to direct. But feeling he wasn't ready, Hamburg passed, and the script fell in and out of screenwriters' and directors' hands for years, with the plot changing back and forth from a guy needing to find a best man to a guy wanting to make friends after moving to a new city. Then, in 2007, Hamburg felt he was ready. Going with the best-man premise, he reworked the script, setting it in L.A.; created a new cast of characters; and sprinkled in his own pop-culture guy obsessions, like his love for the band Rush and casting Lou Ferrigno (yes, the Incredible Hulk), who in the movie hires Peter to sell his house, which is filled with Hulk memorabilia and a life-size bronze statue of Ferrigno on the back lawn.

"One of the first scenes I wrote was Peter and Sydney bonding over Rush, and I thought having a montage of them getting to know each other jamming to a Rush song would be perfect." And Ferrigno? "That was just 100 percent random," Hamburg admits. "In L.A. you run into famous people all the time – at the dry cleaners, at Whole Foods. I thought it would be cool if [Peter] was selling Lou Ferrigno's house." (Lest he be pummeled by Ferrigno when he sees him again, Hamburg adds that the house in the film isn't really Ferrigno's.)

Even though Hamburg has major stars like Ben Stiller on speed dial, he thought Rudd and Segel, both known better for their supporting roles, would be perfect to play the leads. "Paul and Jason are at this level of fame where they have huge followings, but some people have never heard of them," he explains. "I love that, because audiences can get lost in their characters a little more." And with their improvisational talents, Hamburg let them riff when the scenes called for it. In a bar scene, for example, where Peter and Sydney first get to know each other, Hamburg let the two improvise the scene, capturing hilarious moments of the two discussing hybrid cars vs. hybrid animals and marveling over how much Andre the Giant could consume before getting drunk, ending with Segel delivering a perfect Andre the Giant impersonation.

I Love You, Man doesn't play like a predictable buddy movie; Hamburg thinks that's because Hollywood is currently finding success in comedies with genuine stories, the chances he takes in his movie are possible. "I think there's a movement, with Judd Apatow being the leader, of making comedies that seem a little more real and off-the-cuff," he says. "We're seeing that if a movie's funny and connects with people, anything goes." – Jason Guerrasio