Every Step They Take 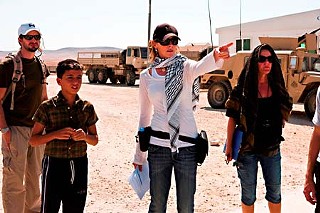 Only a few weeks are left before their tour in Iraq is over. Close but no cigar; in fact, the cigar may blow up in their faces at any moment. They are the bomb techs, the guys in the elite Explosive Ordnance Disposal squad. Their dangerous mission disarming detonation devices in the streets of Iraq provides the suspenseful dramatic frisson in Kathryn Bigelow's new movie, The Hurt Locker.

Unlike the raft of movies about Iraq that have skittered across our screens and collective consciousness since the beginning of the war, Bigelow's film is not a documentary. Nor does it take political sides or have any axes to grind. The Hurt Locker is a war movie about soldiers and their dangerous mission; the conflict comes both from within and without. The grist for this narrative feature comes from screenwriter Mark Boal, an investigative journalist who was embedded with a bomb squad in Iraq. (Boal's firsthand reports from Iraq also supplied the source material for Paul Haggis' 2007 drama, In the Valley of Elah.)

Throughout her career, Bigelow has delivered numerous genre films that obey the traditional conventions yet never fully conform. The characters always provide entryways into her stories, rather than serving as mere chess pieces furthering the narrative. Whether it's the vampire family ties of Near Dark, the surfing bank robbers of Point Break, the female rookie in the cop drama Blue Steel, the ex-cop turned dream dealer in the futuristic conspiracy thriller Strange Days, or the doomed Russian submarine commanders in K-19: The Widowmaker, the characters are always the standouts in Bigelow's films. The men of The Hurt Locker's EOD squad are no different, and it matters not a bit that the film is set in 2004 and that there now exists a timeline for American withdrawal in Iraq. The Hurt Locker tells the story of soldiers who are willing to go beyond the front lines, walk right up to the bomb, and defy the instinct for self-preservation. It's this psychology – common to all battlefronts despite the specifics of the danger – that intrigues Bigelow, which is what may make The Hurt Locker the first film about the Iraq war to have widespread appeal when it opens in theatres this summer.

Austin Chronicle: Most of your action films have been in wide-screen, and Hurt Locker was shot in the squarer 1:85 format. Why did you make that choice?

Kathryn Bigelow: It was basically something that [cinematographer] Barry [Ackroyd] and I wanted very much to do. The story is obviously these EOD experts and what their daily life is like on the ground in Baghdad. I wanted to put the audience in their shoes, to the extent I can, and not have the filmmaking experience be so specific that you're aware of the filmmaking. I wanted to put the filmmaker aside and just tell these men's stories. I think they're the real unsung heroes of the war, and since it's a war of bombs, their ability, their courage, their bravery, their heroism – though it may come at a price – their heroism is something I felt it very important to pay tribute to.

AC: I felt that 1:85 format gave it more of a realistic newsreel kind of look than a "cinematic" wide-screen look.

KB: I don't think of it like that. It is actually, but I would probably replace the word "newsreel" with "immediate." It's so very immediate and not glamorized or cinematic – even though there's nothing wrong with that. But for this particular story, which is pretty graphic and authentic and realistic, I wanted it to feel very immediate and accessible and not put through the lens of something more aestheticized. And it's been an underreported war, so I think the daily life of a bomb tech in Baghdad is something that most people know very little about.

AC: A lot of the film uses handheld POV too, which adds to that immediacy.

KB: Right. Again, it was my interest to give the audience a you-are-there experience and to make it really experiential, so you become the fourth man on the team. You're actually in the Humvee with them, really sharing, day in and day out, the life that these incredible soldiers experience on a daily basis. I tried to make it as authentic, raw, real, and unmediated an experience for the viewer as possible.

AC: The Hurt Locker uses narrative strategies that I haven't seen before in all the various Iraq movies out there, most of which have been docs.

KB: I think of this as a combat film. It's not a reintegration-into-the-home-front film. I never looked at The Hurt Locker as part of any tradition other than war films. Classic war films ... about men who arguably have the most dangerous job in the world ... and yet it's a volunteer army. It's an interesting psychology ... complicated and multilayered.

AC: The movie's opening quote concludes that "war is a drug." Are you telling us that these bomb techs are basically adrenaline junkies?

KB: Yeah, well, there's a kind of allure to combat. The author of that quote, Chris Hedges, has written a pretty extraordinary book called War Is a Force That Gives Us Meaning. And he talks about the allure of combat, and it's a beautifully argued statement. It's really looking at that threshold – what are the limits of bravery? – and how bravado alone may not save your life. What would enable you to walk down a street – the entire place is contained, you're walking by yourself, there's nobody there who can help you – toward this object in the middle of the ground. It's just extraordinary conceptually. That was really the genesis of the project, along with Mark [Boal]'s bringing that information back from his Iraq reporting. It's pretty extraordinary – both the futility and the irrevocable wave of roadside bombs these men face on a daily basis. And yet this information was not translating back here. I found it to be both extraordinary and a really rich opportunity for film.

AC: It sounds like you perhaps had thoughts of doing a combat movie and then latched on to Boal's story for the specifics.

KB: It always comes from the characters. I tend not to work from genre in; it's character out. But that psychology that we just talked about – what would get you to take that long lonely walk? – that was what I wanted to understand.

AC: The film also shows that there are characters who respond to the situation in different ways but are equally effective.

KB: Equally effective, equally as courageous and as heroic.

AC: One's a cowboy, and one's more measured and cautious and sensible.

KB: Exactly. One is more tempered with caution; the other has no capacity for caution whatsoever.

AC: Although you've worked with several formulas or genres throughout your career, you always do them in your own way.

KB: Well, it all starts with the material. We were so lucky. The world of journalism is still a great window into our life experience.

AC: At least for however long our world of journalism continues to exist.

AC: There's another question ... or several. Do you ever get tired of being cited as the only woman directing action movies or genre films. How does that sit with you?

AC: Yet the stories you choose to tell generally take place in a mostly male world.

KB: Again, I think it really starts from characters and a fascination with a particular character in this film. The face of bravery in the 21st century Army was really the way into this movie for me. Not from a standpoint of gender.

AC: Are you an adrenaline junkie yourself?

KB: I don't think of myself that way. I guess we're all in our material in some way, but I don't think it's a one-to-one relationship.