Plumbing the depths of Joe Dante's 'Trailers From Hell' 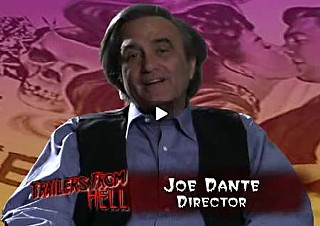 "When I first came out to L.A. in '74, there were a lot of film collectors out here, and I was a film collector, too," says Joe Dante, the man behind the Mogwai of Gremlins, the hirsute horrors of The Howling, and the director of what must be George W. Bush's least favorite episode of HBO's Masters of Horror, "Homecoming" (in which the corpses of American servicemen killed in Bush's Middle East folly rose up from their body bags to vote W. out of office).

"They used to commandeer theatres at midnight and just run hours of trailers; it's not a type of program that anyone can enjoy. You have to be a real fan to appreciate that many movie trailers for that amount of time. But it occurred to me, after some time, that I had all these great trailers, and since I had no place to run them anymore, I thought why not put them up on the Internet?"

The resulting site – TrailersFromHell.com – combines the best of genre (and, occasionally, nongenre) trailers with introductions and optional commentary tracks from some of the greatest directors, producers, effects artists, and grindhouse gurus in the world, from Allison Anders to George Hickenlooper, Eli Roth to Edgar Wright. It's not only one of the best collections of trailers ever assembled, it's also hopelessly addictive and a fine way to put off reading the studio's asinine "notes" on your screenplay for yet another week.

"We started out with the idea of only doing exploitation trailers," says Dante, "but as we enlisted more and more people to be commentators, we found their tastes to be much broader than that. And so we've ended up with this eclectic assortment of movies that are classics and movies that are terrible and movies that are in between."

As every film geek and regular attendee of the Alamo Drafthouse's infrequent trailer marathons knows, the previews are almost always the best part of the communal moviegoing experience. Sadly, contemporary trailers are more often than not designed and cut together by corporate committees, resulting in bland, unmemorable previews that can't hold a candle to their earlier counterparts, celebrated so effectively on Trailers From Hell.

"To me, trailers, when they're good, are like cinematic haiku. You're taking the essence of a movie, and you're boiling it down to 2½ minutes or thereabouts. Every decade had its own particular style: In the Forties, there were lots of lights, lots of onscreen cars, lots of hyperbole, and the Forties and Fifties are kind of my favorite period for trailers. Around the Sixties, people started getting a little more sophisticated about trailers. If you look back at the trailer for the picture The Grapes of Wrath, for example, it's always astonishing how much more sophisticated the movie is than the trailer, so that it could appeal to the widest possible audience. But in the Sixties, some of the filmmakers started to actually assert control over the advertising of their films, and then you got people like Kubrick who basically were responsible for the trailers for pictures like 2001 and Dr. Strangelove."

Today, of course, what we get are "guys running away from the exploding fireball," notes Dante. "With Don LaFontaine, the trailer-voice guy who recently passed away, he was one of the reasons trailers used to be so memorable. Lines of his entered the cultural lexicon and became almost cliché. For instance, I dare you to find me a modern trailer that doesn't have the word 'now' in it. It's just a bromide. And it's really hard these days to find a really clever trailer, because there's so much money riding on the movies that the producers are terrified that they're going to strike out. It's kind of sad, but that's the exact opposite of what we try to celebrate about movie trailers on the site."

Trailers From Hell With Joe Dante