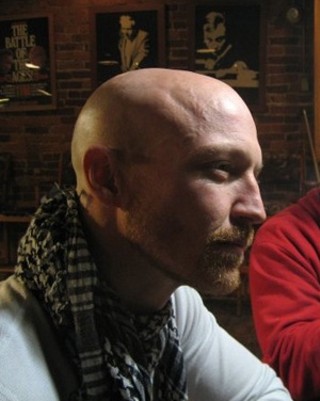 "The street will find its own use for things": William Gibson wrote that in his story "Burning Chrome" back in '82, nailing it to Omni magazine's erstwhile door to the future. Define "street" as vox populi, and figure what's always been most necessary is an amplifier to broadcast that voice throughout the city that the literal street and its iterations construct.

The street found its own use for audio-record turntables, shifting them from rote reproduction to notable creation with backspin, bump, and scritcha-scritcha-scratch, leading to what's become a Hancock-sized signature of the current zeitgeist's DIY soundtrack.

The street found its own use for sprayable paint, birthing a vernacular that's virused its way into the world's graphic perception of its wilder elements, leading to letterform creations like something from a monastic calligrapher's wet dream of color and shape.

The street found its own use for xerography and adhesives, as marked in '86 by Shepard Fairey's "Andre the Giant Has a Posse" campaign, leading to iconic Obamanations and dissension among the rankled ranks of indie aesthetes.

The street finds its own use for things, and things evolve, and there are always new things: computers, for instance. Lasers. Light-emitting diodes.

This is where James Powderly and Evan Roth of Graffiti Research Lab come in. They're artists and hackers, enablers of dissension and delight, devoted to bringing the newest things – open-sourced and on the cheap – to the purpose of the street.

That amplification of the urban vox populi, the voice of the cultural underdog howling against the ever-closing bars of its commercial cage? The use of cutting-edge technology to communicate a hearty and visually compelling fuck-you to the Man? That's Powderly and Roth and their associates. And Powderly, previously detained by Chinese authorities for planning to LASER Tag the glammed-up cityscape with pro-Tibet slogans at the Beijing Olympics, is gonna be walking the streets of Austin soon?

"I'm coming to South by Southwest Interactive to give one of the keynote lectures," he tells me over Skype from Berlin. "I'm not really doing a project – not officially, at least – just giving a talk with New York Times writer Virginia Heffernan. I'm not even sure what we're going to talk about yet. We should probably get in touch and, ah, figure that out."

Graffiti Research Lab, started in New York City but now purposely rhizomed across the globe, figured out how to turn the brightness of light-emitting diodes and the stickiness of glue into the LED Throwies that illuminate the nightside of diverse urbanscapes. The GRL figured out how to brand huge buildings with laser pointers and computer-assisted light projection, how to fabricate a Barry McGee design for extending the range of spray-paint tags. Surely the group's co-founder can co-conjure a fittingly interactive conversation?

"Well, Heffernan writes a lot about the culture of the Web," says Powderly, "and we have a sort of dual existence where we practice our work in public spaces out in the real world and in public spaces on the Internet, trying to leverage the power of those two spaces to get our message out."

Austin Chronicle: That sounds like a good general area to cover right there.

James Powderly: I hope we get to talk about two or three things in particular. One of them is the work I did with my partner, Evan Roth. He lives in Hong Kong and can't come to the U.S. all that often, or he'll lose his Hong Kong residency status – which is why he won't make it to South by Southwest. We've been putting GRL projects on hold so we can work on the FAT Lab. That's our Free Art & Technology Laboratory, which kind of extends what GRL did with graffiti artists. We're trying to popularize open-source work, letting people know about it and how much we've benefited from it and how much we can benefit from it in the future. And maybe I can talk about China and what happened in Beijing.

AC: About your incarceration?

JP: My clusterfuck in the mainland, yeah. And hopefully we'll get a chance to talk about some things that are in midcoitus right now, like the trial of Pirate Bay, one of the stalwarts of open sharing of content on the Web.

AC: Those guys in Sweden, right?

JP: Yeah. At the behest of the U.S. government, the Swedish courts are bringing the Pirate Bay to trial. So now's the time for us to rally behind one of our, well, heroes. The pirate flag's long been one of the icons of the movement that we consider the Bay and Graffiti Research Lab to be a part of. I'm sure that, at South by Southwest, the recording industry and the motion-picture people are all gonna be there ... and it'll be nice to make our case right to their dirty faces.

AC: Thanks for providing such a great quote, man! And of course there's the rest of the Festival to enjoy, too.

JP: I'm not gonna be too long for Austin. I'm just coming in and going back out, because we have a busy April where I'll be coming back into the U.S. to work on a project in Los Angeles with the FAT Lab. I hope to get to check out the Interactive side of things, and the Film side. None of the Music stuff, though.

AC: None of the Music stuff?

JP: It's weird, because they give us this pass where we can get into all the Film and Interactive stuff, but then we can't get into the concerts for free. I think the Music side of it's still a bit disconnected from the other. It's a bit like the Sundance Festival – they have the Film Festival, and then they have the New Frontiers Festival – which is like the back of the bus, with all the interactive artists and things like that.

AC: So what makes a meatspace gathering like South by Southwest worthwhile, anyway, when everybody's already hooked up online?

JP: Ultimately, people still need to get sweaty together. It's great to meet people on the Web, but it's really just a prelude to what has to happen in real life.