Read the book ... and leave this DVD to the television archives where it belongs 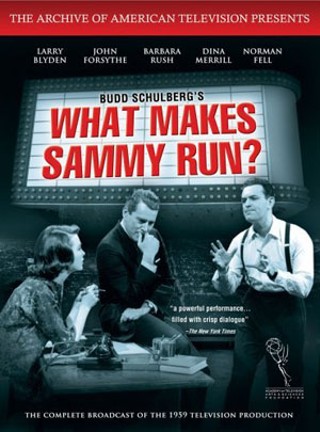 
With all due respect to Ulysses, The Moon and Sixpence, The Great Gatsby, The Bridge of San Luis Rey, Portnoy's Complaint, Mason & Dixon, and The Wind-Up Bird Chronicle, if I had to choose one 20th century novel to take with me to the opera, I'd go with What Makes Sammy Run?, Budd Schulberg's comic masterpiece of pathological megalomania, acute narcissism, ruthless opportunism, and rampant materialism. In other words, his book about Hollywood.

Published in 1941, What Makes Sammy Run? is one of those great American novels critics are always claiming haven't been written yet. It's funny, it's tragic, it's ironic and cynical, it's got violence and sex and movies about violence and sex, and it features the most American of all themes: the pursuit of success at all costs. The indomitable force at its center is Sammy Glick, an American archetype as resonant in 20th century America as Huck Finn was in the 19th: the self-made island unto himself, a human disease, as Schulberg once said, caused by "some upside-downing of the Golden Rule that resulted in its brutal opposite: 'Do it to him before he does it me!'" Now, if only a recently rediscovered televised version of the book were half as full of brazen amorality, we might have had ourselves a ball game.

Presented in 1959 as part of NBC's golden-age Sunday Showcase (brought to you by Crest, the toothpaste that "spares your children needless suffering"), Schulberg's prime-time adaptation of What Makes Sammy Run? is similar to his book only inasmuch as its characters have the same names, perform the same jobs, and live in Los Angeles. Everything else – the satire, the rapid-fire pacing, the hobnobbing and the street-fighting, the casual inhumanity – has been swept aside, replaced by an overearnest morality fable that's at once too narrow and too broad to do the great novel justice.

In a 2008 interview shot for this disk, Schulberg claims of the TV special, "The basic characteristics [of the story] are the same," which couldn't be further from the truth. One is replete; the other is a hollow vessel. Do yourself a favor: Read the book ... and leave this DVD to the television archives where it belongs.