The 'How's Your News?' crew rolls out its unique brand of reportage on MTV 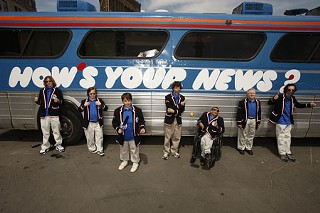 There was a moment during the filming of MTV's new show How's Your News? when Arthur Bradford, the co-creator of the series and a graduate of UT's Michener Center for Writers, wasn't exactly enjoying himself. It was at the Grammy Awards, on the red carpet. There may be nowhere on earth more ill-suited to the idea behind How's Your News? than the red carpet at the Grammys, but the reporters for the show were eager to see what covering a red carpet is like. How's Your News? features seven people with mental disabilities traveling the country in a restored 1970s Buffalo Top Cruiser bus interviewing celebrities as well as everyday citizens. None of the interviewees, famous or otherwise, is used to being approached by someone with Down syndrome, for example, who puts a mic to them and asks, "How's your news?" At one point in the first episode, reporter Jeremy Vest, who has Williams syndrome (which means that he skips from subject to subject and doesn't realize that he's gone off topic), is interviewing a musician and says: "I heard your performance. It was really good." The musician thanks Vest, who then asks, "Were you sweaty?"

How's Your News? is one of the most eye-popping, feel-good, and surreal shows that MTV has ever featured. There is nothing like it anywhere on TV, for that matter. In the first episode, reporter Bobby Bird, who has Down syndrome and is difficult to understand, asks comedian Jimmy Kimmel a question that sounds entirely unintelligible. "I don't like to talk about my sexuality, but let's just say I am what I am," Kimmel responds. Later, Vest gets frustrated with Bird at the Grammys when Bird keeps high-fiving the members of the Shins while Vest is frantically trying to interview them.

One of the beautiful elements of How's Your News? is the power that the show's reporters, who are paid for their work, have to upend the scripted and fake manner in which many celebrity interviews are conducted. Bradford and the show's producers try to ensure that interview subjects aren't told beforehand that the How's Your News? reporters have mental disabilities. "It's this strange, complete crossing of wires in the conversation," Bradford says. "Our reporters have a lot of advantages; they don't have a lot of pretension, and nobody tries to script them." While the show's reporters were covering the red carpet at the Grammys, Bradford felt frustrated because, "what we thrive on is that initial interaction, and hopefully the premise isn't explained to them," but no good publicist wants to put his or her client in front of reporters who aren't going to stick to the script.

Anyone who hasn't seen How's Your News? may wonder whether its creators present the show's reporters as agents of their own unique and sometimes mystifying power or exploit them as spectacle. "It's a two-tiered process in the editing room – you watch things, and you have to say: 'Is that funny? Is it respectful?'" Bradford explains. "It's not funny if it comes across as exploitative. There's no difference to me between good comedy and moral decisions about what's appropriate. Basically, the atmosphere has to be that the reporter feels in control, that they're not being forced to do something they don't want to do."

How's Your News? began as a video Bradford made with the residents of Camp Jabberwocky, a summer camp on Martha's Vineyard for people with disabilities. South Park creators Matt Parker and Trey Stone saw the video, called Bradford, and offered to fund a documentary (along with producer John Pierson) that eventually played at the 2001 South by Southwest Film Festival; HBO then aired the documentary in 2002. Now, on MTV, How's Your News? is a series of six 30-minute episodes that feature many of the same reporters who made the first Camp Jabberwocky video with Bradford in 1993. One episode is devoted entirely to the music scene during SXSW 08, including a performance by the How's Your News? reporters. "I didn't want How's Your News? to become this arthouse phenomenon," Bradford says. "The point of How's Your News? is this quest for mainstream acceptance [for the show's reporters], so being on MTV is the biggest coup for us."

Bradford, whose collection of short stories, Dogwalker: Stories, was published in 2002, has often put his literary career on hold to produce How's Your News? Why has he stuck with it? "I ask myself that all the time," he says. "I really, really enjoy working at the camp. Probably about at the point when it's time to stop going to summer camp every year, that's when I became the co-director."