There's life in it yet: The ailing Texas film industry is looking awfully sparky these days. We like.

It's fitting that as the Texas film industry is about to gather at the Capitol to lobby for an improved, competitive statewide incentives program, positive signs of the down but not out local movie biz are everywhere. First off to the lobbying: The Texas Motion Picture Alliance is marshaling its forces for a rally on the Capitol steps at 7:30am Wednesday, followed by a day of visits with legislators to push changes in the program, including replacing the 5% incentive cap with a flexible number to be set by the Texas Film Commission on a case-by-case basis. See more at www.txmpa.org. Now about those good omens: Terrence Malick is remarshaling his own forces for a few days of additional shoots on The Tree of Life, the production that took over Smithville for a good chunk of 2008 and was the largest project in the state for the year. Expect a few days of activity somewhere in Austin on March 14 & 15. Whether that involves Brad Pitt or Oscar winner Sean Penn is anybody's guess, but don't count on it... Meanwhile, on a much smaller scale, the promising independent film news: Bryan Poyser, Austin Film Society's director of artist services and director of Dear Pillow, is back behind the camera with the feature Lovers of Hate, a tragicomedy about two brothers vying for the same woman. Poyser has been quietly filming in Park City, Utah, home of a certain film festival that is not named South by Southwest, in recent weeks and followed that with Austin shoots. Megan Gilbride is producing, and the cast is intriguing: Austin native Heather Kafka (who first made her mark on MTV's Austin Stories), Alex Karpovsky (whose film Trust Us, This Is All Made Up premieres at SXSW this month), Chris Doubek, and Zach Green. David Lowery, whose film St. Nick shows at SXSW, is behind the camera... Poyser's work on Dear Pillow earned him a 2005 nom as Someone to Watch in the Film Independent Spirit Awards. This year, the Independent Spirits cast their wand over two filmmakers who made their marks first in the Austin film scene. The John Cassavetes Award for best film made for less than $500,000 went to Alex Holdridge's In Search of a Midnight Kiss, which – to complete the circle – included editing work by Poyser's old pal Jacob Vaughan as well as Austinite Frank Reynolds. And Margaret Brown's The Order of Myths took the Lacoste Truer Than Fiction Award. Brown's film is out on DVD now and will show on PBS later this year. Now if we could just entice these folks to come back to Austin. Any legislators listening?... OK, one last hint of why filming in Texas, and particularly Central Texas, pays: Friday the 13th, the remake shot in the Austin area by the remake specialists at Platinum Dunes, was this year's top-earning opener with $42.2 million at the box office in a four-day weekend. Of course, that was followed by a record drop-off the next week aided by so-so reviews, but nobody's perfect. 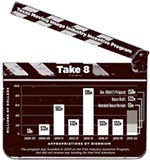 Movies or Medicaid: A False Choice at the Texas Legislature
Another tug o’ war over funding for Texas’ film, TV, and gaming industry rebate program