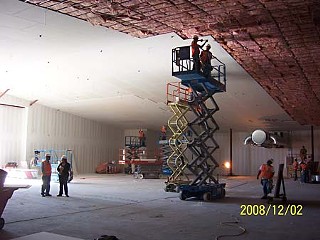 Soundproof it, and they will come. Air-condition it, and they will smile. Celebrate it all with a party, and we will all be there. Welcome to the new and improved Austin Studios, the former airport hangar that helped create a real live Austin film industry. And to that end, the Make Watch Love Film party includes a job fair Jan. 30 from 6 to 9pm at Austin Studios (1901 E. 51st). It's free for Austin Film Society members (join now), neighbors, Texas film crews, and students at the right participating schools. All others get in for $10. The ribbon-cutting makes it all official at 6pm sharp, to be followed by quick speeches from Mayor Pro Tem Brewster McCracken, Austin Film Society Artistic Director Richard Linklater, and AFS Executive Director Rebecca Campbell.

And, you, the Austin voters, did this. A whopping $5 million is the AFS facility's slice of the $31.5 million bond package approved by voters to improve the city's local arts and culture facilities. Another $1 million was pitched in by Austin Energy and the city's water utility. Two of the four former airplane hangers have been fully soundproofed and air-conditioned. The entire facility boasts improved security and safety (including fire sprinklers). But the AFS folks are just as proud of the 40-foot-by-20-foot cyc wall (a curved background) that they see as ideal for photo, commercial, and visual-effects shoots.

Why the fuss? Since it opened in 2001, 50 feature films have been made at Austin Studios, bringing a total of $1 billion into Austin's economy. Recent projects include the Temple Grandin biopic starring Claire Danes, Bandslam with Vanessa Hudgens, and the Platinum Dunes remake of Friday the 13th. Add to that a myriad of commercials, music videos, and still-photo shoots, and you get the picture. Prior to this latest upgrade, the nonprofit film society already had invested more than $1 million into transforming the hangars with electrical upgrades, roof repairs, and the construction of a screening room.

For more information on tickets, go to www.austinfilm.org.