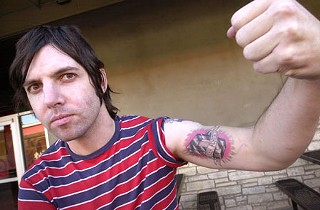 Alamo programmer Zack Carlson (Photo by John Anderson)
Lars Nilsen is the programmer for the Alamo Ritz's Weird Wednesday. He also writes film notes for I Luv Video's website (www.iluvvideo.com). Zack Carlson programs the recently rebranded Alamo Ritz Terror Tuesdays. Both are megafans of the VHS format, with personal videotape collections that rival those of any serious film geek. We asked them to explain their highly personal feelings on the death of VHS, the rise of Netflix, and the importance of keeping the tape alive.

Austin Chronicle: Do you remember your first experience with VHS?

Zack Carlson: My grandfather was always trying to be on the cutting edge of technology in the early Eighties, so in 1981 he brought home one of those immense, 80-pound, top-loading VCRs that probably cost $2,000. Along with the player, he had bought a selection of family-safe Disney movies and allowed me to choose one out of a stack of five or six. And the one I picked was The Devil and Max Devlin, starring Bill Cosby as Satan plaguing Elliott Gould. I was really excited because I really had no idea how this was going to work. I mean, you open up this huge, white clamshell case that makes this satisfying, suction-y pop when you opened it, and then within that was this black rectangle that held wonders.

I was so obsessed with seeing movies on VHS that I would go to the video store with a pad and a pen and walk up and down the rows and make a list of any movies I saw that didn't have any visible blood or cleavage on the box covers, so I would have a kind of Sophie's Choice of movies that I would be allowed to watch. I didn't yet know about checking to see what the rating of a particular movie was.

Lars Nilsen: I remember we got our first VCR late in the game. There was one video store in the town my parents had moved to, Whitakers, North Carolina, and I remember they had The Corpse Grinders and a Dolemite display with a standee. This would have been back in 1987 – like I said, late in the game.

AC: All of the sudden it seems like the world can be divided into two distinct camps, the Netflix people and, for want of a better term, the I Hate Netflix people. Where do you fit within this framework of explosive prerecorded emotionalism?

LN: I hate Netflix, but I have it. I would never have it if I wasn't the ultimate video power user, which I am because it's my job. Making preshows [for the Alamo], I need the access to every kind of video in the world. And I also have memberships at Hollywood Video and Blockbuster Video and all the evil stuff. But of course my heart is with Vulcan and I Luv Video. Occasionally I'll need a Vanessa Williams workout video for a preshow or something, and that's not something I'm going to find at Vulcan or I Luv Video.

LN: I really do think of Vulcan and I Luv Video as the Alamo Drafthouse of video stores. Here at the Alamo, we're in a business that's supposed to be trailing off and dying – movie theatre chains are having trouble all over, and the death-knells are sounding all the time – and yet we're doing well because we provide a personalized experience that's so close to our customers' hearts. And I think what Vulcan and I Luv are doing is exactly the same thing. Nothing has made me happier – almost nothing – than seeing Hollywood Videos shutting their doors and Blockbuster Videos shutting their doors after only a few months of hardship because they can't deal, they can't cope, they're not on nor have they ever been on ground level. Vulcan and I Luv, on the other hand, have always been on the same level as their clientele. They know that they have an audience that wants to see, for example, the The Mighty Boosh. If it ever came up that a Blockbuster audience wanted The Mighty Boosh, it would take seven months for them to evaluate what The Mighty Boosh was, right, and then another seven months to figure out how many copies to order. Whereas at I Luv Video, they know to order four sets, because they know, almost instinctually – like I'm talking on a cellular level – who their customers are and what they want.

That's really their competitive advantage. Right now, in the world of independent video retail and rental, there's a war going on. And places like Vulcan and I Luv Video are the ones practicing guerrilla tactics against the big entrenched armies of Netflix and similar companies, who will never win. Because when it's time to take that war to the jungle, Vulcan and I Luv Video are already there. They never left.

AC: You guys are zealots. Why is it so important to keep up with grainy old VHS tapes, anyway? Isn't shiny/faster/newer better?

ZC: VHS is crucial, not just as nostalgia but also because it's a viable way to grow as a person who appreciates movies. Only 25 percent of the movies ever made prior to the birth of VHS were ever actually released on home video. Today, approximately 50 percent of the movies that were available on VHS are now available on DVD. So you're looking at huge sections of films that were just lost. I think there's about 90,000 feature films – besides porn – that are available on DVD, which means that there's another 90,000 movies out there that people are willing to just let fade away if they're going to forego the VHS format. And that alone makes VHS completely valid and an integral part of being a movie fan. I want to beseech people to not throw away their VCRs – or go get one for $5 at a garage sale – because VHS is that important.

It's, like, only a tenth of the records that were available on vinyl have been made available on CD, and so there's tons of great art in all older formats that is just slipping away. And that's just wrong.

LN: I think the vinyl/VHS comparison is apt, and I think that's where VHS is going to go. I think we're even starting to see that now, with young people beginning to go crazy about collecting VHS tapes and finding VHS treasure troves. It's going to be like LPs. I'm not saying that DVD is inherently better than VHS, but the fact is, you really do have such a wider selection on VHS. It's like vinyl in the same way – if you're a DJ or a person who really cares about music and you don't have a turntable right now, then you are a lame person. If you're just watching DVDs and listening to CDs and doing the same thing everything else is, then your conversations are probably going to be about as exciting [as someone] who watch[es] Lost and 24 and nothing else.

ZC: You're neutering your potential for being entertained.

ZC: Can I just say one last thing?

ZC: Video store employees get this a lot: A customer will come in and say, 'There was this movie I saw when I was 12 and it was the best movie I've ever seen and it was about a dancing shark on a skateboard and I've never been able to find it again!' And the nice video-store clerk will say 'Sir or Madam, I know that movie, and I have wonderful news – we have it on VHS and here it is, your childhood restored!' And the customer will say something like: 'VHS?! Pah!' and turn around and walk out of the store because they're so depressed and disgusted that it's only available on VHS.

But c'mon, it's like having an ugly child. If the only way to see this movie is on VHS, you should watch it on VHS. Just because it's not in your slick, modern, digital technology doesn't mean that it's not a great film. If you had an ugly kid, would you throw it away? No, you'd just turn the lights down a little and savor its unique, otherworldly grotesquery, which, after all, is what makes it so special in the first place. VHS and ugly kids matter. They are life.