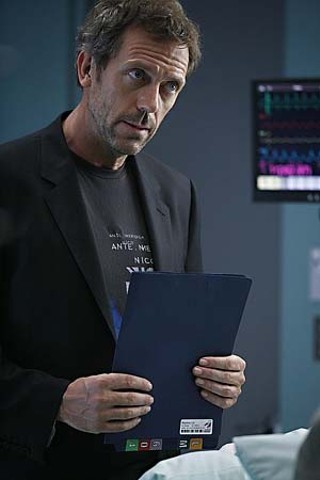 The Golden Globes showers its love on ... House? Really?

The Golden Globe Awards are right around the corner, signaling the start of award season. While the Globes are focused on the big screen, the Hollywood Foreign Press Association (the group which hands out the Globes) offers nods to TV as well, with some interesting choices.

Nominated for Television Series – Drama: Dexter (Showtime), House (FOX), In Treatment (HBO), Mad Men (AMC), True Blood (HBO). I just don't get it. House? Really? Everything else makes sense to me, but Mad Men should be the winner. Beautifully shot, skillfully acted, riveting storytelling: It's simply the best of the rest.

Best actress in a drama: Sally Field (Brothers & Sisters), Mariska Hargitay (Law & Order), January Jones (Mad Men), Anna Paquin (True Blood), Kyra Sedgwick (The Closer). What a strange assortment here. On one end you have Field as the mother hen over a brood of adult children and Hargitay as the lone female cop in the boys club. Solid but not heart-stopping performances. Sedgwick is always appealing, even when the material does not match her performance, and it's the supporting cast of True Blood that was worth watching. Overall, it's Jones who should take the Globe home. She earned it for her eating-chicken-after-a-one-night-stand scene alone. But of course, anyone who has watched Mad Men knows that is only one of many amazing scenes.

Best actor in a drama: Gabriel Byrne (In Treatment), Michael C. Hall (Dexter), Jon Hamm (Mad Men), Hugh Laurie (House), Jonathan Rhys Meyers (The Tudors). Again, I ask you: House? Surely, Michael Chiklis from The Shield would have been a better choice. All the other nominees are deserving, but you guessed it – I'm choosing Hamm.

Best actress in a musical or comedy: Christina Applegate (Samantha Who?), America Ferrera (Ugly Betty), Tina Fey (30 Rock), Debra Messing (The Starter Wife), Mary-Louise Parker (Weeds). Applegate has grown on me after a few more viewings, but I have to say, the real performer in Samantha Who? is the versatile Jean Smart (who won an Emmy for her supporting role earlier this year). Smart's performance is so effortless it makes Applegate look like she's working too hard. The same could be said of Messing. For true acting chops, it's Parker who stands above them all. I still love 30 Rock's Fey, but Parker is better.

Best actor in a musical or comedy: Alec Baldwin (30 Rock), Steve Carell (The Office), Kevin Connolly (Entourage), David Duchovny (Californication), Tony Shalhoub (Monk). The real competitors in the pack are Baldwin and Carell. While I think Baldwin is brilliant, I think I would give the nod to Carell, whose nuanced performance made you laugh and cry – sometimes in the same episode.

The nominations in the Best Performance in a Supporting Role in a Series, Mini-Series or Motion Picture Made for Television can be best described as wonky. Collapsing formats and genres together, it's like comparing apples to oranges. The nominated actresses include: Eileen Atkins (Cranford), Laura Dern (Recount), Melissa George (In Treatment), Rachel Griffiths (Brothers & Sisters), Dianne Wiest (In Treatment). It gets even wonkier with the nominated actors: Neil Patrick Harris (How I Met Your Mother), Denis Leary (Recount), Jeremy Piven (Entourage), Blair Underwood (In Treatment), Tom Wilkinson (John Adams). Wiest and Griffiths have the uncanny ability to make reading the phone book sound thrilling. But I vote for Dern, who managed to keep her performance of Katherine Harris (the former Florida secretary of state who gained prominence in the 2000 presidential election) this side of clownish. As for the men, Harris, Piven, and Leary in the same category with Wilkinson? Overall, I would go with Underwood only because Wilkinson has another nomination in another category for his role as James Baker in Recount, which he should win, hands down.

The complete list of nominees can be found at www.goldenglobes.org. The 66th annual Golden Globes ceremony will be telecast live Sunday, Jan. 11, at 7pm on NBC.