1. Synecdoche, New York Nothing this year so perfectly melded the elements of direction, script, performance, and visuals to create a totally immersive universe that beseeches my return again and again.

2. Tell No One This psychological thriller from France captivated me thoroughly from beginning to end, with nary a stumble or false alarm. C'est formidable.

3. Milk This triumph of storytelling for Gus Van Sant and performance for Sean Penn is buttressed by a wonderful ensemble and period authenticity. Got Milk? Yes, my cup runneth over.

4. The Pool Hardly seen and hardly distributed (so far), this India-set narrative by Chris Smith, better known as a documentary maker, is a surprising, enlightening, bare-bones revelation.

5. Elegy Philip Roth finally gets the film interpretation his work deserves with this feminist/humanist take on life, love, and death.

6. My Winnipeg So believable it could be a documentary, so surreal it must be imaginary, so authentic it can only be the singular insight of visionary filmmaker Guy Maddin.

7. Gomorrah There are so many strands in this stunning-looking Italian crime thriller that it initially threatens to verge into chaos but instead coalesces into a magnificent symphony.

8. Gran Torino Clint Eastwood has made a perfect career-capper, reformulating the various essences of his work for a contemporary world and directing himself without a hint of self-indulgence.

9. U2 3D For once, 3-D is used not for wowwy effects and startling nature photography but in a way that complements and enhances the performance.

10. Slumdog Millionaire Danny Boyle again proves his mastery of the art of storytelling, thrusting us into the vibrancy and squalor of Mumbai slum kids as skillfully as he did with junkies and zombies.

The Pool, U2 3D, Cadillac Records 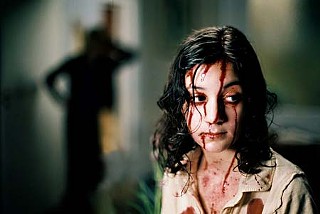 Repo! The Genetic Opera. Blood saga? Goth opera? Over-the-top theatrics with the bar set at zero? Sarah Brightman and Paris Hilton? Quick: Order me up some of the film's numbing drug, Zydrate.

Not One but Two Memorable Times at Bat in 2008: Streep, Van Sant, Brolin, Franco, Winslet, Eastwood, Banks, Cruz, Downey, Kingsley ... and Ledger, sadly, only one.

2. A Christmas Tale Turns out Christmas dinner is just as fraught in French. Wickedly funny, emotionally wrecking, and – zut alors! – the best gosh-durn ensemble acting of the year.

4. Happy-Go-Lucky Within five minutes, you want to drown the giggling girl at its center. Give it five more, and you'll fall for that most uncommon of characters – a head-on-her-shoulders, sunshine kind of optimist.

5. Rachel Getting Married Demme, an actors' director par excellence, stripped down and gave us a low-down dirty but ever-loving lens on a broken family's stutter-steps toward reconciliation.

6. Let the Right One In Swedish tykes in something like love – with decapitation, to boot. A slow burn set to icy cool and a bonkers-kinda beautiful.

7. Tell No One For all its twistiness, this breakneck French adaptation of an American thriller novel was the most uncomplicatedly satisfying genre film of the year.

8. Son of Rambow A sweet, plucky tale about two boys finding a family with a camera and with each other. Still haven't wiped the stupid grin off my face.

9. In Search of a Midnight Kiss A new generation's Say Anything, sans the happy ending. Unless you count the last-reel Scorpions sing-along. And I kinda do.

10. WALL-E If they'd just skipped the silly parts with the Pixar-ated humans, it would have been top to bottom sublime.

Speed Racer. If this is the future of film, then you'll find me burrowed in a bunker somewhere knee-deep in Hawks, Wilder, Hitchcock, and Welles.

1. A Christmas Tale Arnaud Desplechin's brilliant family epic is as uncontainable and messy as life itself.

2. Gomorrah Adapted from Roberto Saviano's book, this trip through the hell that is the modern-day Neapolitan Mafia splits the difference between The Wire and City of God.

3. Wendy and Lucy The simple story of a woman looking for her lost dog becomes a heartbreaking meditation on life at the losing end of American capitalism. 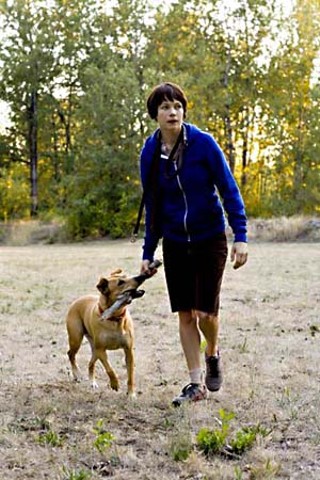 4. The Counterfeiters Nazis forcing a master Jewish criminal to counterfeit British pounds in a last-ditch effort to win World War II? What more could you ask for from a movie?

5. I've Loved You So Long Kristin Scott Thomas gives one of the year's best performances as a former convict condemned to the prison of her own memory.

7. Man on Wire James Marsh's highly original documentary about Philippe Petit, the man who walked between the twin towers in 1974, is as full of bluster as its subject.

8. Che A self-important yet fascinating historical epic that's both bloated and microscopic, as interested in the day-to-day mechanics of violent revolution as its ultimate meaning.

9. The Wrestler Mickey Rourke saves himself from obscurity with his layered portrayal of a professional wrestler doomed to it.

10. Trouble the Water Bush and Brownie should have to watch this first-person documentary filmed from inside Hurricane Katrina twice a day, everyday, for the rest of their lives.

Tell No One, In Search of a Midnight Kiss, Slumdog Millionaire, Hancock

Hancock, The Counterfeiters, I've Loved You So Long

The Reader. Hollywood's endless fascination with the Holocaust as easily digestible, artfully photographed life-lesson reaches a new low with this adaptation of the Oprah's Book Club bestseller.

Most Predictable Disappointment: Indiana Jones and the Kingdom of the Crystal Skull. George Lucas continues his quest to turn his past work, and all my childhood heroes, into garbage.

2. Let the Right One In Ecstatic and disturbing in equal measure, like a single drop of crimson on the lips of your love. Death is lonely.

3. The Wrestler Mickey Rourke bares more body and soul than Kid Galahad and Gorgeous George combined, while Udo Dirkschneider howls on the soundtrack. "Balls to the Wall," indeed.

4. My Winnipeg Black and white and weird all over, Guy Maddin's heartfelt homage to his sleepy, snowbound hometown makes your own dreams seem dull by comparison.

5. Gomorrah Simply the most devastating Italian post-neorealist crime story ever made. See Naples, and die.

6. Man on Wire Philippe Petit wire-walks between the twin towers of the World Trade Center in this mesmerizing, exhilarating, and very much haunted documentary.

7. Waltz With Bashir An animated recounting of the Israeli-Lebanese war of 1982, and more specifically of the Sabra and Shatila massacre, this is not a love song.

8. Blindness At times as disturbing to watch as anything outside of Gaspar Noé's Irréversible but a powerful and ultimately hopeful metaphor for human shortsightedness, nonetheless.

10. Funny Games The medium is malevolent: Germany's Michael Haneke remakes his own meta-manifesto on media mayhem for us cyber-saturated Yanks. We die.

Encounters at the End of the World, Paranoid Park, The Bank Job

The Happening. M. Night Shyamalan's numb comeback was neither as exciting as The Wind in the Willows nor as terrifying as Leaves of Grass. Seriously, dude. WTF?

Rachel Getting Married, Revolutionary Road, Frozen River, The Duchess of Langeais, Towelhead, The Dark Knight, The Wrestler, Vicky Cristina Barcelona, A Christmas Tale, Happy-Go-Lucky, Let the Right One In, Son of Rambow, In Search of a Midnight Kiss, WAL, Synecdoche, New York, Tell No One, Milk, Elegy, My Winnipeg