Cash-strapped but ever hopeful, aGLIFF looks to next year 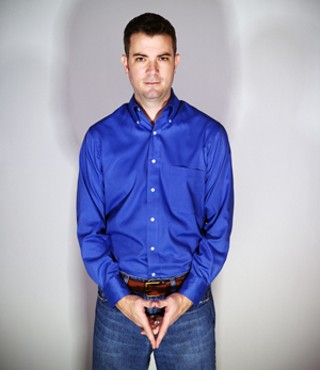 "We have less than a month of operating expenses," reports aGLIFF Executive Director David Sweeney. (Photo by Celesta Danger)

In an economy that continues to dramatically shrink, raising money for a small nonprofit must be a particularly sobering prospect. For David Sweeney, the executive director of the Austin Gay and Lesbian International Film Festival, fundraising for a small nonprofit like aGLIFF has actually been "terrifying." Although aGLIFF expects a $24,000 grant from the city to materialize soon, "we have less than a month of operating expenses" in the bank, Sweeney says. He joined the festival in April, relatively late in the organization's fiscal year. "I didn't have any time to shore up any corporate sponsorships" before the festival took place in September, he says. "Most decisions are made early on in the fiscal year, and the hard part about it this year is that no one has any money."

aGLIFF may be in need of money, but its staff and board are already making significant changes to next year's festival (which will take place Sept. 8-13). 2008 was the first year aGLIFF was held at the Alamo Drafthouse at the Ritz; this year's festival was also half as long as its traditional 10-day run. Now, after combing through the feedback from this year's festival, aGLIFF's staff and board have decided to move next year's festival to the Alamo Drafthouse South Lamar, an indication that it needs a larger venue than the Ritz. The festival will also stop holding screenings during the daytime on weekdays, limiting screenings to nighttime hours. "There was a lot of criticism about having [aGLIFF] at the Ritz Downtown," Sweeney says, namely complaints about the lack of parking in the area. "The habit of having films shown during the day, during the week – having these beautiful docs screen on Tuesday afternoon and only a few people show up – it's very cost-prohibitive." Sweeney says that aGLIFF members have already started giving money to the festival because of the organization's responsiveness to its members' opinions. "One thing I've been very heartened by is that I've been getting $500 checks from people who are happy that aGLIFF is moving back into a theatre that has parking," he says.

Contracts haven't been signed yet, but both aGLIFF and the Drafthouse expect the changes to take place next year. "We're happy to work with them and hope to continue our relationship, regardless of programming time and location choice," Mike Sherrill, the Drafthouse's chief operating officer, says.

aGLIFF plans on featuring approximately the same of number of films at next year's festival (96 were screened this year). That number ultimately depends "on the quality of the films we get in," says aGLIFF's program director, Grace Gonzales, who has replaced Lisa Kaselak, who left the organization at the end of October to pursue her own filmmaking career. This year's aGLIFF was notable for the improved and vibrant quality of its programming from previous festivals. Gonzales says that only one film, the dark French comedy Before I Forget, got resoundingly negative responses.

aGLIFF will mark its 22nd anniversary in 2009. "When [aGLIFF] started, from what I can tell, it was really geared toward the gay male community of Austin," Gonzales says. "Since then, there's been an explosion of diversity; we can't program to one aspect of the community. We have to make it diverse, and I think we did a good job of that this past year, in the selection of the films." Two of the three most popular movies at this year's festival were about transgender people – the documentary Trinidad by Austin filmmakers Jay Hodges and PJ Raval and the Korean feature Like a Virgin, about an overweight teenage boy who unexpectedly wins a wrestling match to raise money for his transformation into a woman. Another audience favorite, Tom Gustafson's Were the World Mine – "a loud, fabulous musical," as Gonzales puts it – reveals that "there's still a place for those movies that worked 22 years ago," but the popularity of the other two indicates that "there's also this hunger for movies that are new."