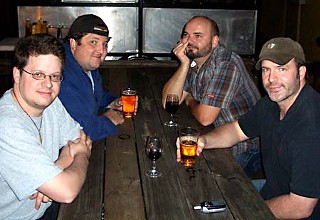 Mushroom Men is a game of scale, and its central character, Pax, a small fish in a big ocean. More precisely, he's a little bolete mushroom in an intimidatingly large back yard. The all-consuming Spore Wars rage around him as he fights spiders, insects, and even other mushroom tribes with whatever weapons can be MacGyvered together using what's at hand (e.g., corncobs and Popsicle sticks). Our fungal friend searches for his roots and just maybe saves all of mushroomdom from bolete to morel.

Pax's digital creators at Red Fly Studio followed a pretty standard model in the gaming world. Talented people work for the man, dream of bigger (smaller?) things, take the indie plunge, and see their dreams realized ... or destroyed by poor planning or by any myriad of unforeseeable difficulties. In that way, Red Fly doesn't break the mold. CEO and Creative Director Dan Borth and Art Director Kris Taylor have worked for almost every man in the industry: Nintendo, Sony, and, most recently, Microsoft. Their big dream centered on a tiny anthropomorphized mushroom who took up enough of their free time and artistic passion to merit a leap into the void of self-employment. 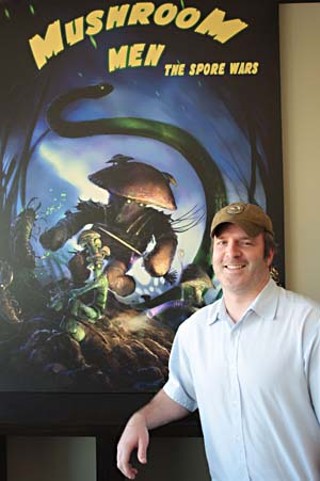 "It was the biggest risk around: two artists asking for millions and millions of dollars to make a game," says Borth of the early days of shopping Mushroom Men around. Without the cash up front, both Borth and Taylor took on contract work doing character design for blockbusters such as Silent Hill and Gears of War to make ends meet. The contract waters were rough, though. Apparently, large corporations have a tendency to take advantage when small businesses are vulnerable (who knew?). "When you're sitting there with a contract worth X amount of dollars, and that's how your wife and kid eat, and then they say they want you to do it for half, there's nothing you can do about it," Borth explains. "When you've got someone like Kris Taylor – arguably one of the best artists in the industry – taking orders from some turd in another company who shouldn't be allowed to hold his jock strap, it's incredibly irritating, but that's how you make money." Not all of Red Fly's contract relationships merited fecal comparisons, however. Gears of War creator Epic Games asked for work, was happy with the end product, and paid Borth and Taylor accordingly. Red Fly was back in the air.

Frank Teran, who had been with the Red Fly duo from the beginning (if remotely from New Jersey) and is now Red Fly's lead concept artist, polished the Mushroom Men pitch. Soon it was in the hands of Austin publisher and indie darling Gamecock Media. The timing was perfect, as Gamecock wanted original titles to promote.

It quickly became obvious that artists alone do not a business make. Borth found himself an artist in an ill-fitting business suit – metaphorically, of course, as he's a T-shirt and jeans guy. However, with the leap from character-design work to CEO of his very own game-design studio, the necktie of number crunching and spreadsheet interpreting tightened around his neck. "I took a Business 101 bath pretty quickly," admits Borth. About that same time, Mushroom Men was green-lit with roughly $5 million of investment green from Gamecock. 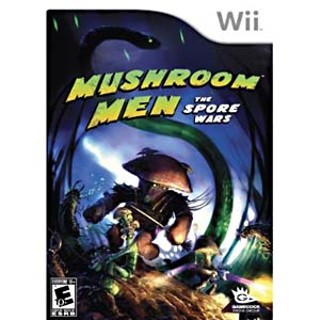 With money in pocket and spores waiting to germinate, Red Fly's office lunches expanded from one picnic table to an entire patio, and Pax's world was designed, programmed, and tested for public consumption. A year and a half later, Mushroom Men was ready for its promotional polish.

One speed bump remained. Mushroom Men publisher Gamecock found itself a victim of a tanked economy and was bought by SouthPeak Games in October. The timing could hardly have been worse for our heroes, both mushroom and human. As the two publishers signed the perfunctory papers and hashed out the buyout, Mushroom Men's release date was postponed from Nov. 11 to Dec. 2, and the promotional campaign sits in limbo between an all-but-defunct studio that put the money up for the game and the new stepparents whose love understandably doesn't seem as strong as that of the game's original overseers.

Placing blame exclusively with SouthPeak or Gamecock is an oversimplification, but suffice it to say that external forces stacked the deck against Mushroom Men. A Dec. 2 release misses a decent chunk of holiday sales: a gaming sales season predicted to buck the overall dour economic trend and flourish. Add to that a less than full-throttle promotional push, and Red Fly's hands are tied, but with fingers crossed, the team hopes that word of mouth and blog buzz can get units off the shelves. Even so, with movies as proof, word of mouth is good for a cult hit but rarely a holiday blockbuster.

The fact that the game plays on the wildly popular and demographic-spanning Wii and received an "E for Everyone, 10+" rating gives the promotional cloud a silver lining of swelled markets for Red Fly's product. On the other hand, that same Wii popularity also prompted a bevy of mediocre (or worse) titles to flood the stores, making it difficult to differentiate quality titles from what's been slapped together to capitalize on the Nintendo phenomenon. One would hope that a game with a mushroom for a protagonist would stand apart from the crowd, but Nintendo also houses two Italian plumbers who ingest psilocybin mushrooms to gain special powers.

If the Rocky movies teach us anything, it's always to root for the underdog. Cooked in the same mold, Pax and Red Fly both fought good fights. And while laissez-faire capitalism has done nothing but spank America for believing in the the little business that could, it’s hard not to hang on to hope that the little guy will emerge – however bloody and bruised – victorious.