Man, I love me some Jack Bauer. Kiefer Sutherland's modern-day swashbuckling hero of 24 returned to the airwaves last Sunday in a special TV "event" titled 24: Redemption, in a refreshing if not entirely new approach to building buzz for a series.

24 was one of the early casualties of the writers' strike. Series creators did not want to launch the serialized drama's seventh season only to stop when the strike hit, thereby killing momentum of the real-time drama and perhaps turning off viewers. Instead, they opted to delay launching the new season until the strike passed, waiting to return in the midwinter season. That meant almost a two-year wait before fans got their 24 fix. It was a long wait, but I suspect fans were overjoyed with 24: Redemption, and new fans were gained (if you missed the show last Sunday, it's now out on DVD).

The stand-alone episode featured Bauer saving a group of children in the fictional African nation of Sangala from being child soldiers, while offering a vague history lesson on the trafficking of child soldiers in general (really, there's only so much you can accomplish in two hours). It also set up the new season, introducing our heroes and villains (24 has always has its do-gooders and baddies very clearly labeled). The esteemed Broadway actress Cherry Jones joins the cast as the first woman president of the United States, Allison Taylor, while Powers Boothe returns as the lame-duck President Noah Daniels, so bitter and nefarious he makes Richard Nixon look like Richard Simmons. Jon Voight is another designated baddie, playing Jonas Hodges, a high-level muckety-muck who is secretly investing in the rebel forces that tear Sangala apart for personal gain. Peter MacNichol's Tom Lennox makes a brief but comforting appearance in his role as a White House staffer, ever on the verge of getting beat up by the bad kids when he tattles on them. In Redemption, he tells President-elect Taylor that President Daniels is turning his back on an impending coup in Sangala, precipitating a tense meeting between Daniels and Taylor on Inauguration Day, during which Daniels pointedly reminds Taylor that he's still in charge.

The California Terrorism Unit is no longer in the picture, but an extended trailer for the new season reveals that some old faces will be returning, including the hilariously brittle Chloe O'Brian (Mary Lynn Rajskub), former CTU Director Bill Buchanan (James Morrison), and the former CTU operative Tony Almeida (Carlos Bernard), who appears to have at least as many lives as Jack Bauer. Intriguing additions to the 24 cast include Janeane Garofalo as FBI agent Janis Gold and Ally McBeal alum Gil Bellows as a U.S. State Department officer. One disappointment is that it appears Robert Carlyle (Trainspotting) will not be reprising his Redemption role as Jack's mentor Carl Benton, a former Special Forces agent turned missionary who is sheltering young boys from being drafted into service by a brutal warlord. Jack Bauer is a loner, a warrior wounded psychically and physically, and few others besides Benton could understand what that feels like. Benton's friendship provided a refreshing and believable counterbalance to Bauer that, in seasons past, would have been serviced by a doomed (and tedious) love interest. The guy-pal chemistry was strong between Bauer and Benton, but who knows – maybe Benton will prove as resilient Tony Almeida.

The seventh season of 24 returns in a two-night, four-hour premiere Jan. 11 and 12 before settling into its regular time slot on Jan. 19.

Product placement: How much is too much, and is there a better solution? I can tell you exactly who 24: Redemption's sponsors were. While that might please the advertisers, it irks me. I have no need or interest in those products. In my view, "too much" is when the placement stands outside the narrative.

Some accept product placement as a necessary evil in the new media climate. How else will advertisers get their word in when DVR users like me fast-forward through their commercials? My snarky answer is: It's not my problem. It's the advertiser's job to engage, not annoy – which is why I adore the newest feature on Hulu.com. At the beginning of certain episodes, Hulu viewers are asked if they prefer to see one two-minute commercial before the show or several throughout the episode. According to Hulu.com, 88% of their viewers prefer the two-minute upfront ad in exchange for uninterrupted viewing time. Big surprise. Here's another one: Advertisers are not entitled to my attention. They must earn it, just like every other thing vying for my attention. 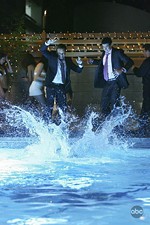