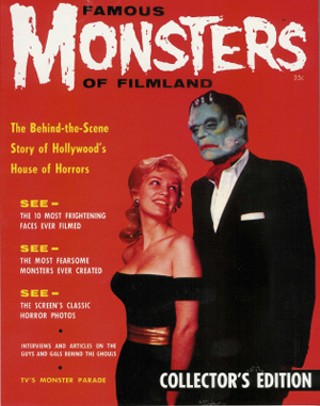 Ain't It Cool News and a host of online blogs reported last week that the world's oldest monster kid, Forrest J Ackerman, is gravely ill and not expected to recover. You might not know his name, but the nearly 92-year-old writer, film scholar/historian/
preservationist, and sometime actor affectionately known throughout the fantastic-film-loving universe as "Forry" is the reason you abbreviate science fiction as "sci-fi": He coined the term in 1954, melding the lengthier, Hugo Gernsback-derived genre term to the then-popular slang "hi-fi" (for "high fidelity," natch).

"Big deal," you say. "Anyone can coin a catchword." True dat. But as the editor of the legendary shriek-show mag Famous Monsters of Filmland, few others had more pop-cultural impact on the 20th century's up-and-coming monster-movie-makers and genre writers than Forry. Those who count him among their biggest influences range from Stephen King to Steven Spielberg, Joe Dante to José Mojica Marins (of Coffin Joe fame). Those who he's repped during his years as a literary agent include A.E. Van Vogt, Isaac Asimov, and best pal Ray Bradbury, not to mention a pre-Scientology L. Ron Hubbard.

An averred secular humanist who nonetheless passed on his love of the bizarre, the strange, and the altogether ooky, Forry's responsible for more good old-fashioned monster-lovin' fun than anyone this side of Stan Lee. (Heck, he even owns the signet ring Bela Lugosi wore in Tod Browning's original 1931 Dracula!)

Our most heartfelt wishes and fondest fantastique memories go out to the ailing Mr. Ackerman. More info on the man and his million and one accomplishments can be found at his MySpace page, www.myspace.com/forrestjackerman. Correspondence and notes can be sent to: Forrest J Ackerman, 4511 Russell Ave., Los Angeles, CA 90027.

In Print
Remembering Uncle Forry and his 'Legendary Ackermansion'