At Home at the Easel, If Nowhere Else 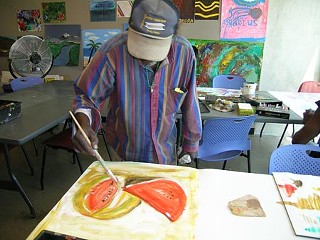 Art From the Streets

According to government estimates, on any given night there are between 500,000 and 800,000 homeless people in the United States, approximately 3,500 of them here in Austin.

Now, this isn't generally the kind of information people look for from a night out at the movies, and no one would fault you for choosing to stay far away from any film that was only out to spread those kinds of statistics around. But while Austin filmmaker Layton Blaylock's directorial debut, Art From the Streets, doesn't shy away from the cold truths about the homeless epidemic, its aim isn't to depress or lecture but rather to point out a small but significant bright side to all the misery.

In 1991, volunteers Heloise Gold and Christi Pate teamed up with the Austin Resource Center for the Homeless to offer art classes to members of the city's homeless community. They called it Art From the Streets, and soon their twice-weekly classes were filling up. After several successful months, Gold and Pate took the logical next step and put their students' work on display and up for sale. By 2003, the two-day Art From the Streets Show and Sale was bringing in nearly $70,000 for its artists, a staggering number considering how many of those artists had long before learned to survive on next to nothing.

Blaylock, a longtime cinematographer and producer who's worked with Richard Linklater, Dennis Hopper, and Chris Columbus, shoots his documentary from the artists' points of view, following five homeless Austinites who have found in Gold and Pate's classes not only a source of temporary income but also a much needed sense of purpose, community, and self-worth.

Pat Bailey, one of the film's featured artists, puts this more bluntly than I ever could. Homeless for a year at the time of filming, living in her car, plagued by clinical depression but unable to afford medication, she refuses to tell her family about her condition because she's afraid to admit she's "failing at life." It's the most devastating moment in a movie filled with devastating moments, and Blaylock – like Bailey – doesn't pull any punches. But one look at Bailey's vivid watercolor portraits is enough to remind viewers that, even in the most dire circumstances, the human desire to create – and create well – is no minor miracle.

It's a lesson we see repeated in the lives of the other four artists featured in the film: Penney Hunt, a former drug addict and abuse victim living under a tarp in a bamboo grove outside the city center; John Curran, a free-spirited former soldier abiding in a homeless shanty town by Lady Bird Lake; John Monbelly, a young Houston transfer who sells his paintings on street corners and under highway overpasses; and Howard Cook, the reigning shining star of the Art From the Streets program, who makes enough money with his abstract canvasses to keep a roof over his head for months at a stretch.

It's melodramatic to call art salvation, but it may be the closest thing we've got.

Blaylock will be in attendance at a Sunday screening of Art From the Streets for a question-and-answer session, and on Nov. 15 and 16, the Art From the Streets Show and Sale celebrates its 16th year with more than 2,000 new pieces up for grabs. It's art that gives us a glimpse into the lives of those forever going unnoticed and that provides its makers the rare and golden opportunity to, as one program volunteer describes it, "[make] money on something that's coming out of their soul." 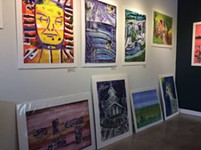 'Get Art: Give Hope'
Austin nonprofit offers homeless artists a voice with annual showcase and sale