For Mature Audiences Only 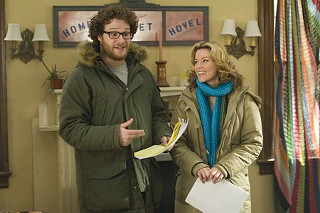 Kevin Smith's new film, Zack and Miri Make a Porno, is exactly what it sounds like. It's raunchy, sexy, funny, and profane enough to make your grandmother explode at 20 paces if she gets within 20 paces of the theatre marquee, never mind what might happen should she accidentally wander into a screening unawares. It's also one of Smith's sweetest, most emotionally honest films to date, and coming from the director who made Clerks., Chasing Amy, and Dogma, that's saying a lot. Elizabeth Banks and Seth Rogen play best friends from childhood who, desperate for rent money, embark on the titular filmmaking only to discover that sex between lifelong friends can be more complicated than mere lighting and camera issues. The Austin Chronicle spoke to Smith while he was in Austin last month about Zack and Miri, why pornography isn't necessarily a bad thing, and why he used to take showers with all his clothes on after gym. (Note: This interview is suggested for mature readers only.)

Kevin Smith: In one way or another, it's been something I've been working on since Chasing Amy. After I was done with that, I wanted to do another film with Joey [Lauren Adams], Jason [Lee], and Ben [Affleck], and I had an idea for a story that was set kind of on the periphery of the porn industry. But then Dogma happened, and the project fell by the wayside, until finally I saw Seth [Rogen] in The 40-Year-Old Virgin, and I realized I wanted to do Zack and Miri. It has a lot to do with him. Seeing his performance made me want to write for him. And I wanted to write for him when he was a supporting actor. I thought, I'm going to write him a lead; he'll get really famous; he'll owe me for life; he'll be like Affleck Version 2. I finished the script, like, two weeks before Knocked Up came out, and suddenly I'm seeing Seth Rogen's face on billboard's everywhere I go. I thought I was going to break him, but he was already broken by the time I got there.

AC: Were you a Freaks and Geeks fan?

KS: That and Undeclared, yeah, but I watched them on DVD after they aired. But the difference between Seth in those shows and Seth in The 40-Year-Old Virgin is a huge, deep chasm. I sent him an e-mail saying I had written the script with him in mind for the lead and asked him if he wanted to read it, and he sent me a reply literally within five minutes. He said: "No bullshit, when I came to Los Angeles, an agent asked me what I wanted to do, and I said, 'I want to be in a Kevin Smith movie.' Please send the script; I'd be honored." And I was like, "Yesss!" That was nice because I didn't write it for "movie star Seth Rogen." I wrote it for that dude that I thought was funny in The 40-Year-Old Virgin.

AC: It's good to see Jason Mewes on the straight and narrow and alive. I almost didn't recognize him with his trademark locks cut.

KS: Yeah, but I can't remember the title. I do remember the situation. I was at a family friend's house. She was a teacher at my school, and my parents were friendly with her because my brother and sister, who were grades above me, had had her. So they go out to pick up pizza and leave me with the dog –

AC: And then 30 midget clowns emerge from under the bed. 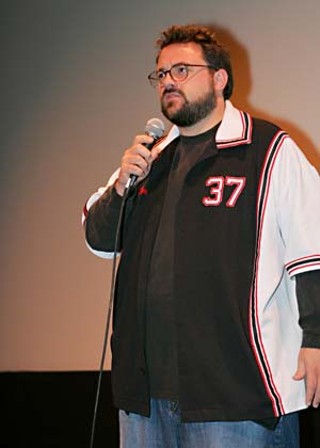 Kevin Smith at the Paramount in 2007 (Photo by Gary Miller)

AC: Or in your hands.

AC: New Wave Hookers 2. Gregory Dark directed it in 1992 before going on to do videos for Britney Spears and Mandy Moore.

KS: I remember that one! A lot of neon, DayGlo colors, lots of pink boots and stuff, right?

KS: Right. I'm all for average people taking their clothes off on camera. That's my favorite thing to look at in the wide world of online porn. I've kind of lost interest in well-lit, overly designed shots. My favorite thing now is the "see my girlfriend"-type porn, where it's basically just this insanely candid footage shot on a camera phone or a home video and then uploaded, usually but not always on purpose, to the Web. I dig it because it's so insanely voyeuristic, but then I don't dig it because, you know, there's no way all these girls signed off on this. And that kind of makes me uncomfortable, because I realize that one day my kid is going [to be] this age. I've just got to make sure I raise her to not let anybody take pictures. That's the one thing you want to impress on kids. I'm not saying "don't fuck" – I've been fucking from age 13 on – because teenagers are going to fuck regardless. That's what they do. I'm just telling my daughter, you know, make sure you don't fuck any idiots; don't give it up to a dude who's popular just because he's popular; don't let homeboy talk you in to some fucking shit that you're going to regret later. Because no matter how much you think you're in love, when you break [up], this dude can take all those pictures and throw 'em up on the fucking Internet. And as a parent, that's tough, because you can't monitor that kind of thing, and you don't want to infringe on her freedoms. Mercifully, my daughter's 9, so hopefully I've got at least five years before I have to start worrying about this stuff. But I really don't want to be cruising porn sites some night and go, "God, is that my kid?!" That would be horrible.

KS: No. Fuck no. Dude, I would never want to see myself fucking. Because you're talking about angles that my wife, midcoitus, has never seen. Plus, I draw all the curtains, all the lights are off, I'm wearing a shirt, so it's not like I'm ever fully exposed anyway. It's rooted in complete body-shame issues. Even in high school, I didn't shower after gym unless I was wearing all my clothes. And then the other guys in the shower would look at you all weird, and I'm like: "You guys are all fucking naked. You're the weird ones."