It's All Nice on Ice 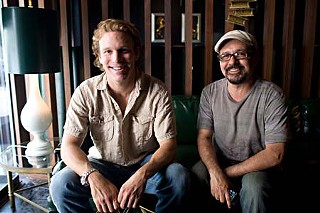 Travis Knapp really did try his hand at the snow-cone business while working as a stockbroker, but he never planned on being a filmmaker. A born salesman, he bought and sold cars during summers off from studying finance at Texas A&M University and made some cash with T-shirts featuring a Longhorn with the horns removed. Then came five grueling years as a stockbroker, followed by big personal questions about the point of it all. "In the rat race, even if you win, you're still a rat," he says of the turning point that resulted in the very personal film, Sno Cone Inc., which premieres Oct. 23 at the Alamo Drafthouse South Lamar.

The comedy follows three twentysomething stockbroker trainees who also are learning big lessons about the rat race. It features Morgan Fairchild and Tony Sirico (Paulie "Walnuts" Gualtieri of The Sopranos). Knapp's journey steered him to volunteering for the Salvation Army feeding the homeless and listening to their stories. Then he had the notion of a reality television show about the community pulling together to get people back on their feet. Along that path he met a couple of other professional refugees: attorney Arnie Reyes and engineer Jeffrey Travis, who fed his movie dream. "It has an overall positive message about doing the right thing and trusting you instincts," says Reyes, who ended up producing the film. For Knapp, it's an Austin-shot labor of love. "Five or six years ago, I heard about a guy who was going to make a movie and thought, 'What an idiot.' Now I'm that idiot."

Sno Cone Inc. screens Friday-Sunday, Oct. 24-26, at 7pm at the Alamo Drafthouse South Lamar. An afterparty at the Belmont will feature live music; proceeds will benefit the Foundation for the Homeless. For more info, see www.snoconemovie.com.