The Stuff That Cubicles Are Made Of 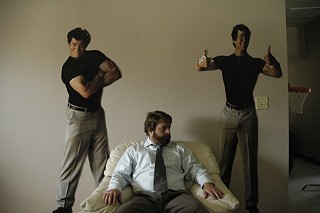 The Chronicle recently spoke with independent filmmakers the Drake brothers – director Jared and writer Brandon – about their first feature, Visioneers, an absurdist comedy/drama about an office drone named George (played by comedian Zach Galifianakis) struggling to find meaning in a hypercorporate, dystopian future where dreams are deadly and mindless productivity is king.

Austin Chronicle: What was the idea behind Visioneers? Do you consider it a personal film?

Brandon Drake: Making Visioneers was cathartic for us, because at the time, we had just finished film school at UCLA, we didn't have much money, we didn't know too many people in the movie business, but we were really trying to hang on to the idea that we could make the movies we wanted to make without asking permission from anyone, and that we could live life our way. So having this character George living in a world where people don't dream anymore, where they don't follow their dreams and even fear their dreams, was coming directly from our own concerns. And all those days when we were waiting on people in the industry to return our calls or read our script and we felt like we were going to explode, the issue of freedom, both artistic and personal, was really pressing on us.

Jared Drake: The burning desire to make a film and to live the kind of life we wanted to live became the inspiration for the story.

AC: As in so many dystopian movies, the goal of the controlling powers in Visioneers is to sell people on the value of happiness through conformity. Do you think freedom is to some degree about experiencing unhappiness and dissatisfaction?

Jared Drake: Absolutely. In the end, the movie's about a guy who's trying to find something to believe in, an individual trying to find meaning. And though at the end of the film there is some joy, in that joy there's a lot of sorrow, because though you may be living how you want to live, heartbreak inevitably comes with that freedom. And when George finally makes that break from the system of mindless work and repressed desires and squashed dreams, his life becomes much more difficult and much more meaningful at the same time.