'As Long As There's a Record Deal, We'll Always Be Friends' 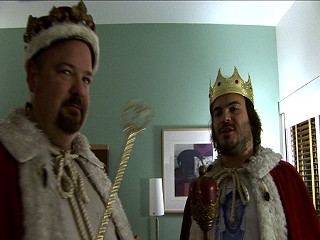 Tenacious D insider and D Tour director Jeremy Konner takes viewers behind the scenes on the D's world tour in support of its feature full-length comedy The Pick of Destiny. But what was supposed to be a "victory lap" heads south quickly after TPOD is panned mercilessly (if unjustly) by critics and ticket-buyers stay away in droves. Konner and crew were given full access to bandmates Jack Black and Kyle Gass, as they navigated through the mucky muck of their first commercial flop in the midst of a 35-date world tour featuring a full backing band and an elaborately hellish stage show. Gass blows off steam by napping and playing side gigs with his band Trainwreck while Black has the comfort of his wife and young child along with visits from friends John C. Reilly and the White Stripes' Jack White to distract him from the disappointing box-office performance of TPOD. (And really, how could Jack Black not be friends with Jack White?) The bad vibes take root within the band as Gass has to deal with the media's incessant focus on Black, which comes to a head during a taping of the Letterman show, where Black is the only member of the D invited to join Dave on the couch. When asked if it was difficult to tell when the D was joking or when they were genuinely hurt by TPOD's lackluster reception, Konner says: "Jack and Kyle joke around quite a bit, but in that joking around is also where you find so much of their sincerity. ... It was very clear they were genuinely very disappointed; they really had poured their hearts into the film. But they joke around about it. That's their way." Despite the blow to morale following TPOD's release, the D keep on truckin' through their world tour and find solace in the fact that they are capable of filling 15,000-seat halls around the world and that their friendship, and band, can endure anything. Even a big-time flop.