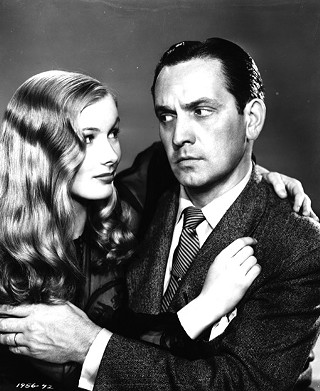 "Are you all right?"

"I've been waiting for you, Mr. Wooley."

The first voice, beckoning oasis in the smoke-filled Pilgrim Hotel, belongs to Veronica Lake. Quick, name one Veronica Lake movie. The wave of her blond cascade, indented over one eye, outlives her filmography. Frenchman René Clair pivots her carefully toward the camera in 1942's I Married a Witch.

"Hmmm, not bad," comes her appraisal at the looking glass. "Oh, I'm a blonde." Turning to the camera for the first time, "Would you rather I be a brunette?"

"If you don't get out of this fire, you'll be a redhead!" cries Fredric March.

Poor soul. March's suddenly corporeal charge can muster only a mink coat and a matching pair of booties as he, the state's next governor, snatches her up in his arms and whisks her out of the collapsing building. In source novel The Passionate Witch, begun by Topper scribe Thorne Smith (who died midwrite), finished by Norman Matson, and published the year before this big-screen brew, Jennifer Broome exits the fire on T. Wallace Wooley's shoulder wearing only his stubble:

"The strange woman on his shoulder had skin that was very smooth and inexplicably cool. There was an odor of roses about her, too, or had been before the smoke thickened. Her position was not conventional, not a position usually assumed by a woman you had just met. Her legs went on before. All he could see of her was what he could see out the left corner of his eye, a blur, a pale hill or two. He was not enjoying himself."

Sole carryover from the book, the scene's cinematic translation takes obvious liberties in the wardrobe department. According to Diane Jacobs' last-word biography, Christmas in July: The Life and Art of Preston Sturges (1992), the father of screenwriters probably torched the rest of the source work: "To his new friend René Clair, Sturges could not have been more gracious. In Europe, Clair was king of comedy, but as an expatriate in Hollywood, he had trouble getting work. When Preston urged Paramount to give him a film to direct ... [he] agreed to produce Clair's film, which became I Married a Witch.

"Sturges got Veronica Lake for the lead and assigned four writers, including himself and Dalton Trumbo, to the screenplay."

Trumbo, blacklisted Tinseltownie and upcoming documentary subject (Trumbo), quit under the overcommitted Sturges, who finally recused himself to make absurd delight The Palm Beach Story. A boy during his mother's Cinderella-like reinvention in Paris at the feet of modern dance matriarch Isadora Duncan, Sturges turned French farce into trademark Americana. René Clair, whose The Italian Straw Hat, Under the Roofs of Paris, Le Million, and À Nous la Liberté between 1927 and 1931 rival early Chaplin, was one of the director's forebears. Sturges foisted on Clair his delectable hobo from O Brother, Where Art Thou? inspiration Sullivan's Travels, Constance Keane becoming Veronica Lake only the year before. I Married a Witch, ultimately written by Robert Pirosh (A Day at the Races), opened days after the actress' 23rd birthday.

"Wally, doesn't it seem strange to you – the way we met?"

"Of course. I've been under your spell since the moment I met you."

Under her hex rather. In The Films of Fredric March, author Lawrence J. Quirk references Lake's autobiography. "Lake claims that they did not get along well during the shooting, that March had a low opinion of her abilities, and that she disliked him soundly and got back at him via small annoyances any way she could."

Not Fredric March of first Academy Award Dr. Jekyll and Mr. Hyde (1931); not Tolstoy's Vronsky to Garbo's Anna Karenina (1935); not Norman-remember-the-Maine going down in A Star Is Born (1937)? Yes, Willy Loman (Death of a Salesman) and even Matthew Harrison Brady himself (Inherit the Wind). Second Oscar-winner Al Stephenson, The Best Years of Our Lives, holds the secret – in a highball glass, martini shaker, and final bowl of punch. Not the alcohol, the actor holding his liquor. You see, Fredric March was a comedian from his Lubitsch touch (Design for Living) down to his boxer's right cross on Carole Lombard in Technicolor fluffer Nothing Sacred, Ben Hecht's warm-up to The Front Page/His Girl Friday.

Brad Pitt wore Death sincerely opposite Anthony Hopkins in Meet Joe Black, his performance holding a modern candle to March in Death Takes a Holiday (1934), wherein the originator provides his own comic relief, the precise role Stephenson plays in one of the best films of our lives. A ubiquitous VHS rental with unfathomably little title recognition, I Married a Witch has vanished as a 35mm print from all the usual libraries, and only Spain counts it as a DVD title. The Austin Film Society and moi, series sorcerer, don't care. As Jennifer whispers late into I Married a Witch: "These are things that have no meaning for me now. ...

"Love is stronger than witchcraft."

I Married a Witch: The Films of Fredric March 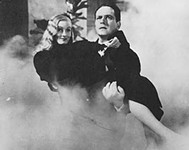