Often, the causes that call us are the culmination of coincidence, an awareness brought to action by the aligning of circumstance. The seeds of Justin Dillon's fight to bring attention to the plight of modern-day slavery were planted while recording with his band in L.A. in 2004, when the songwriter came across Peter Landesman's New York Times Magazine article "The Girls Next Door."

"That story was just in my head, and then the band got asked to go play music in Russia," relates Dillon. "We were playing shows there for a week, and we met all these girls that were just telling us about these opportunities to come to the States or to Italy to be waitresses or all this other stuff. And these are smart girls, they're educated, but they're 17 and 18 and so desirous to get out of there that even when we told them that they were prime victims for trafficking, they did not want to hear it. They'd show me some of their offers, and it was all bogus. It wasn't a business deal; no one would do a deal like that. And they just didn't want to believe it. When I experienced that, the fact that this is happening in the open, that's when I came back and began contacting organizations to see how I could help."

The result is Dillon's Call + Response, a harrowing and important documentary on the contemporary slave trade that attempts to engage an audience that he recognizes is largely unaware that the problem even exists. The worldwide statistics are staggering, but in the United States alone, an estimated 200,000 people are living in slavery.

Dillon's approach is emotionally effective, even if narratively digressive, juxtaposing interviews with journalists and politicians and brutally horrific testimonials from survivors and activists with immaculately shot performances from musicians such as Imogen Heap, Rocco DeLuca, Talib Kweli, Cold War Kids, and Matisyahu (whose segment was filmed in Austin), as well as a fascinating history of the relationship between music and slavery delivered by Cornel West. Most moving is Emmanuel Jal's witness with his autobiographical anthem "Warchild."

"My hunch was that the music was going to pull information past firewalls that just information alone won't hit," offers Dillon. "It's not really a bait and switch, but it's more about a marriage between the information and music that can maybe take the information a little bit further. The whole idea is just getting a response out of people, and music can bring that information further into the heart and the soul and the mind."

As its title suggests, Call + Response attempts to offset the overwhelming paralysis in audiences made suddenly aware of the extreme reach of the injustices by inciting a simple yet necessary response. In the globalized market, we all are unwittingly culpable in sustaining slave labor through consumption of goods as innocuous as cell phones and coffee; only in a demand for and creation of a viable market for slave-free products will corporations ultimately audit their supply chains.

As Dillon points out, slavery operates in the open, but because we don't recognize it as a 21st century problem, we simply don't see it. Call + Response is at the very least an attempt to open our eyes. 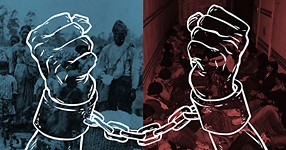