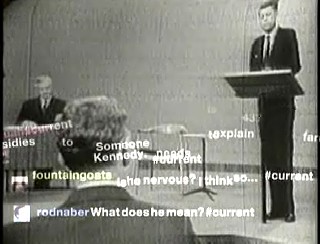 Current TV wants you to hack the debate. No, not this debate, silly – the one between Barack Obama and John McCain.

The Emmy Awards will be handed out this weekend, and I haven't written spit about it. I will remedy that, but not before I remind readers that the first presidential debate will occur Friday, Sept. 26. For those of you who are suspicious of how the Commission on Presidential Debates will handle the event or who are just darn tired of the same old punditry, you may be pleased to know that Current TV (www.current.com) is going to run "tweets" during the broadcast.

"Tweets?" you ask. Those are the short messages that Twitter users send to the Twitter community. Twitter (www.twitter.com) is a social-networking and microblogging service that uses instant messaging and SMS (among other things) to spread information quickly. The tweets will be run as a crawl during the debate and will be edited for "broadcast quality," meaning no foul language. The idea – which is being called "Hack the Debate" – is to empower viewers to "participate in the process" and "join the conversation," says Joel Hyatt, co-founder and CEO of Current TV (the other co-founder is former Vice President Al Gore). "We want our audiences to take over the process," he said in an Associated Press article posted online last Monday.

And the Nominees Are ...

Tough choice, but I would go with the hilariously cringy "Dinner Party," which I just caught in a rerun. I'm afraid Conchords is too out there for most viewers, and Pushing Daisies came out of the gate a little too precious. Either one of the two 30 Rock episodes would also suit me.

Outstanding Writing for a Drama Series: Battlestar Galactica, "Six of One," written by Michael Angeli; Damages, "Pilot," written by Todd A. Kessler, Glenn Kessler, and Daniel Zelman; Mad Men, "Smoke Gets in Your Eyes," written by Matthew Weiner; Mad Men, "The Wheel," written by Weiner and Robin Veith; and The Wire, "30," written by David Simon with Ed Burns.

Ah, an embarrassment of riches here. I would go with the superb Damages, though I would be happy if Mad Men or The Wire got some love, as well.

I'm all for 30 Rock or The Office. Two and a Half Men is a solidly conventional sitcom. I'm tired of Curb. The appeal of Entourage is the insider look at Hollywood, along with strong performances from Jeremy Piven (Ari Gold) and Kevin Dillon (Johnny "Drama" Chase), nothing more.

Why House is on this list, I'll never understand. Boston Legal deserves a nod, but I believe Damages and Mad Men are far superior. The problem with Damages is that its brilliance may have been forgotten. Production was delayed because of the writers' strike, so the second season won't appear until next year. I would love to see Mad Men take the prize, but I think Lost, coming off a season that was hailed as a return to form, is the heir apparent in this category.

The 60th Primetime Emmy Awards will be telecast live this Sunday, Sept. 21, at 7pm on ABC.

Are you the face of Austin? If so, the local CW affiliate is looking for you. Someone wanting his or her chance to work on-air, make public appearances on behalf of the CW, and perform other promotional activities is invited to apply. You'll need to show your chops by sending an audition video explaining why you should be the Face of the CW Austin. The deadline is 5:30pm on Sept. 30. For detailed information, go to www.thecwaustin.com.

'Karma' Chameleon
Is crowdsourced content the wave of the future?