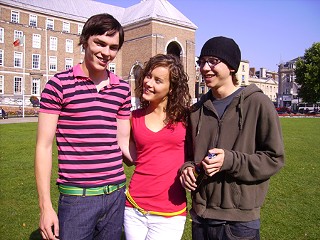 I can count the teen dramas I've allowed myself to get sucked into on one hand: The OC (2003-2007), Freaks and Geeks (1999-2000), and Undeclared (2001-2002). I was never turned on to Dawson's Creek, Felicity, Beverly Hills 90210, or any of the current crop of teen dramas – Gossip Girl, Greek, The Secret Life of the American Teenager, among others. So when I happened across Skins on BBC America, I was unfazed by the marketing promise that it was about teenagers "grab[bing] life by the balls." Another show about horny teens, with blaring music subbing for exposition, an obsession with clothes and accessories, sardonic voiceovers, and stupid or clueless parents? Not interested. And if it's not as whip-smart funny as Freaks, if there is no Seth Cohen underdog to cheer or a great bitchy girl to love à la Summer Roberts, why waste the precious time? But after watching the first two episodes of Skins, I have to admit it: I'm hooked. Is it possible that there is finally a teen drama that plucks the best bits from all these shows – all the emo of Dawson's, the bite of Gossip Girl, and the humor of Freaks? I can barely believe it. And I want to see more.

The cast features many of the usual suspects of your typical teen drama: an alpha male (Tony), his girlfriend (Michelle), the best friend who is in love with the best friend's girlfriend (Sid), the damaged girl (Cassie), the gay boy (Maxxie), the rich girl (Abigail), and of course, the token brown friends just to round out the group (Jal and Anwar). Hey, at least there are two of them – a boy and a girl.

The show has been called "shocking" and "daring" because it talks about sex and drugs candidly. Actually, it's the lack of discussion that is so startling. Sex and drugs are not offered as the anchor to a moral dilemma but merely as part of the fabric of these kids' lives, a fabric which also includes school, parties, teachers, and parents. For those who would prefer their TV teens chaste or even utterly unaware of the siren song of sex and drugs, stay away from Skins. It will destroy your fantasy.

Perhaps the most startling aspect of Skins is that the kids are, well, kids. The youthful cast hovers around age 17, mostly made of teens from Bristol, England, who are new to acting (the exception is About a Boy's Nicholas Hoult, who plays Tony). The average age in the Skins writers' room is 22. The stories and the characterizations are decidedly not from a middle-age perspective of youth culture, nor are they sanitized for your viewing pleasure. Each character has something to love and hate about him or her. That these traits are sometimes contradictory makes them wholly realistic teenagers – one moment you adore them, the next, you want to strangle them. Sometimes you just shake your head.

Each of the young actors is wonderful, but I have to say my favorite so far is Hannah Murray. She plays Cassie, who suffers from an eating disorder. Murray's delicate performance makes her a joy to watch – vulnerable but never pathetic, sweet but never precious. The parents and most of the adults in the series are another thing. So far, none of them has any redeeming qualities, being either clueless, self-absorbed, ogrish, or absent. That's not to say there are no reliable adults in the series. In Cassie's case, it's not her flighty parents or her ice-cold therapist who are there for her but the taxi driver hired to drive her to her therapy sessions. I was going to say that I wish the adult characters were as fully formed as the teenagers. But in reality, as far as teenagers are concerned, adults are always clueless and unable to understand. Isn't that the way it has always been since, well, forever?

The CW Network recently announced that it has made a "strategic marketing decision" not to release press screeners prior to the premiere of the highly anticipated redux of Beverly Hills 90210. "We're not hiding anything," the announcement continues. "[We are] simply keeping the lid on 90210 until 9.02, riding the curiosity and anticipation into premiere night." Perhaps a good way to count down the precious minutes until 90210 premieres is to catch up on that other CW teen series, Gossip Girl; season one was released on DVD this week.

What do recent layoffs at ME Television mean for the future of the music network? Read about it online at the Chronicle's Picture in Picture blog, austinchronicle.com/pip. 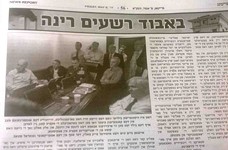