It's been in the works for a solid nine years, with frequent rumors it would shoot in Austin. Now an HBO film about Temple Grandin, who found great success despite suffering from autism, is slated for an October shoot at Austin Studios. Claire Danes is in talks to star as Grandin, according to The Hollywood Reporter. Grandin suffered abuse in high school for the outward symptoms of her autism but went on to earn several college degrees and to become an influential writer and speaker on both autism and the humane treatment of livestock. These days, she's a professor of animal science at Colorado State University. Danes will find friendly faces in Austin: She last starred in Austin director Richard Linklater's European-shot Me and Orson Welles, which will have its world premiere at the Toronto International Film Festival next month... Coincidentally, AMC Entertainment and the Autism Society of America are testing a monthly pilot program in which movie auditoriums will have their lights brought up and the sound turned down. Additionally, audience members are welcome to "get up and dance, walk, shout or sing." The first event is this Saturday, Aug. 23, at 10am at AMC Barton Creek 14. Tickets are $4 for a showing of Star Wars: The Clone Wars.

The latest interesting rumor surrounding Terrence Malick's Tree of Life is that he is shooting part of it in spots around the globe on an IMAX camera, with plans to both integrate that section into the film and to release it separately in IMAX theatres... Look for Matthew McConaughey and his old pal writer/director S.R. Bindler (Hands on a Hard Body) to be on hand for the Sept. 3 world premiere of Surfer, Dude at the Paramount Theatre, to benefit the Austin Film Society. Tickets for the general public go on sale on Aug. 23 for $15 and $25. VIP tickets, including the official afterparty, are $125. More at austinfilm.org... Speaking of the Austin Film Society, it is setting aside $10,000 annually to be awarded as travel stipends to filmmakers bringing their works to festivals around the world... Layton Blaylock will receive the very prestigious Emerging Cinematographer Award from the International Cinematographers Guild on Sept. 21... Sam Um's Austin-shot martial-arts film, Fighting With Anger, which features Willie Nelson, was released on DVD Tuesday... Also available on DVD is Marcy Garriott's B-boy documentary, Inside the Circle. 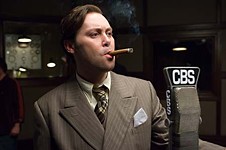 On His Mark
Richard Linklater explores the rich contradictions of artifice and reality, theatre and film, love and desire in 'Me and Orson Welles'