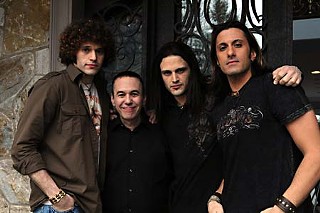 I was skeptical when the screener for Z Rock came in the mail. Sure, it's a new series from IFC TV, and I haven't been disappointed in anything from them yet. Like several other series out there, it's "semiscripted," meaning it depends on the improv skills and whip-smart timing of the actors involved. Could be great, could be tolerable – it's a gamble. But my most compelling reason for not jumping on Z Rock was because its tagline just didn't, well, rock my world: "Rock band by night, kiddie band by day." Yawn. And I love Flight of the Conchords (HBO) – would Z Rock turn out to be a disappointing knockoff of that hilariously wonky HBO series about struggling musicians also living and working in New York? There was only one way to find out.

Z Rock stars the real New York-based band ZO2. Bandmates Joey Cassata and brothers Paulie and David Zablidowsky (otherwise known as Joey, Paulie Z, and David Z) play themselves in this series based loosely on their lives. ZO2 is a working band. They've opened for Poison and toured with Kiss. But even after those high-profile gigs, the band's star hasn't risen as fast or as high as it expected, even with its high-strung manager, Dina (Lynne Koplitz), gunning on its behalf. To make ends meet, the bandmates play children's birthday parties as the Z Brothers (think the Wiggles). The Z Brothers are in high demand by well-heeled New Yorkers eager to throw cool birthday parties for their barely potty-trained offspring. The pay is good, the kids are great (and some of the moms are hot), but what the band is really hungry for is a record deal that would allow them to quit their day job and be serious, all-night rockers. This anxiety about their day job eclipsing their true ambition is what drives the series, putting the boys in many uncomfortable (and funny) situations in which they must negotiate how much they'll compromise to reach their dream.

The Brooklyn-born and bred boys of ZO2 are rock-star cute (aka babe magnets) and enormously likable, though their performances, particularly in the first episode, are uncomfortably green. They get better as the series progresses, but what they're really great at is rocking. So the inevitable performances that occur in each episode really do rock the house. Lead vocalist Paulie Z can blow! He shifts from rock-boy falsetto to head-banging screech with exhilarating speed. David Z on bass and Joey on drums careen alongside with thrilling ease. The good news is that their performances are kept to a minimum, meaning that a plot is not slapped around as an excuse for them to perform. The bad news is that their performances are kept to a minimum. ZO2 really are good, and their short performances leave you hungry for more.

The frustration of leaving ZO2 just as the party is getting started is balanced by the parade of guest performers who drop into Z Rock. The episode that made me laugh out loud was episode six, featuring Dave Navarro (Jane's Addiction). Navarro plays a splendidly over-the-top version of himself (one would hope) who has decided to direct the band's first music video. Several seemingly disparate elements –Navarro's raging narcissism, his self-proclaimed auteur status after having made an adult film, and his love of horticulture – come together seamlessly in a performance that is so crazy, I had to watch it twice. I laughed both times. Musicians who come to sit in along the way include Sebastian Bach (Skid Row), John Popper (Blues Traveler), and Dee Snider (Twisted Sister). Comedians Joan Rivers, Greg Giraldo, and Dave Attell also drop in.

No, Z Rock is nothing like Flight of the Conchords. It has more in common with that other HBO series about a bunch of young lads let loose in the big city, Entourage. Unlike either of those HBO series, you might want to watch Z Rock with the sound up full blast.