The Geeks Shall Inherit the Earth

Ah, to be a comic-book geek with an all-access pass to Comic-Con International 2008 (www.comic-con.org). The four-day extravaganza, to be held in San Diego this weekend, is much more than comic books and fans dressed up as their favorite superheroes. The event has mushroomed to include gaming, online culture, film, and television. In fact, there are at least 120 TV-related events at this year's Comic-Con, featuring stars, creators, and writers from existing shows such as Heroes (NBC), Lost (ABC), Terminator: The Sarah Connor Chronicles (Fox), and others. But I suspect that the more popular TV-related events will be with the stars and creators of new series:

True Blood: Vampires come out of the coffin and live in the open in Alan Ball's first TV effort since Six Feet Under (he'll serve as executive producer and show runner) (HBO).

Life on Mars: A cop gets shot in the present and wakes up in the 1970s in this U.S. clone of the BBC series (ABC).

Dollhouse: Characters have their minds imprinted with skills to undertake covert tasks; their minds Etch-A-Sketch back to blank when missions are over. Created by Joss Whedon of Buffy the Vampire Slayer (Fox).

Fringe: A cop investigating her partner's death discovers paranormal activity is overrunning the world. There will be a preview screening at Comic-Con of this highly anticipated new series from J.J. Abrams (Fox).

So what do Comic-Con and TV have in common? As TV seeks to keep existing audiences while trying to lure those who have moved to other entertainment platforms (i.e., video games and the Internet), the comic-book world is becoming a vital place to mine new material, particularly material that appeals to the current growing appetite for science fiction and fantasy. And when it comes to sci-fi and fantasy, whether it's on TV, the Internet, or on the page, the one big thing that these fans share is a loyal – some would say obsessive – devotion to their chosen story/series. And this kind of loyalty is something TV wants to cultivate. A Google search for Lost, for example, will bring up a full page (there are more) of Lost-related fan sites of various quality which exist to share information and theories about the storyline and characters and generally praise and kvetch about the series.

Fans were thrilled when Joss Whedon decided to return to TV with Dollhouse (starring Eliza Dushku of Tru Calling). The cancellation of his Western sci-fi series Firefly very publicly soured Whedon on network TV. But bygones are bygones, it seems. Dollhouse is currently set for a midseason launch on Fox, but Whedon fans can already check out his latest project, Dr. Horrible's Sing-Along Blog (www.drhorrible.com), which has turned into an Internet comet.

Created with his brothers Zack and Jed during the writers' strike, the three-part, 40-minute tragicomedy was specifically created for the Web but used old-time TV marketing strategies to make it "an event ... like an old TV special [where] you have to be at a certain place and a certain time to watch it," Whedon said in a Variety.com article posted July 18. (A minireview of Dr. Horrible's Sing-Along Blog appears on The Austin Chronicle's film and TV blog, Picture in Picture, at austinchronicle.com/pip.) Dr. Horrible stars Neil Patrick Harris (How I Met Your Mother) as a D-grade villain who aches to be in the big leagues. Nathan Fillion (Firefly) co-stars as his nemesis, the cocky Capt. Hammer, with Felicia Day as the good-hearted Penny, over whom Horrible and Hammer squabble.

Dr. Horrible was available free through July 20, and the response was so strong that it overloaded its server. It is currently available at $1.99 per installment through iTunes (such a deal) until July 29, when it goes away forever. (Well, who believes that?) Industry watchers are waiting to see what kind of return the series has. Right now, Dr. Horrible is the top TV request on iTunes, so the prognosis is good – not just for Whedon and company, who paid for the project out of their own pockets, but also for other artists to make and produce work outside the studio/network structure. But what made Whedon's project so much more successful than Quarterlife, the Marshall Herskovitz and Edward Zwick project that went belly-up almost as soon as it left the gate? The pedigrees among the creators are similar. The big differences are direction, scope, and genre. Are sci-fi, fantasy, and comic-book geeks destined to rule the TV world? If it means the obliteration of reality TV, then hey – I'm so down with it.

TV Eye
The Tweets Tell All 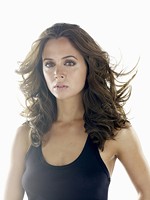 TV Eye
Welcome to the 'Dollhouse'